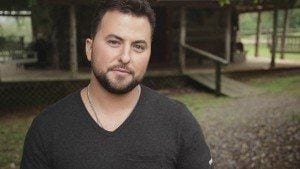 Tyler Farr’s new single, “A Guy Walks Into A Bar” isn’t a parody.

Country music newcomer, Tyler Farr recently released the lead single, “A Guy Walks Into A Bar,”  from his second studio album due out this fall.

While the title seems like a parody or joke of some sort, it’s rather misleading. “The joke’s on me, but ain’t funny, everybody but me could see the punchline coming, a mile away,” Farr laments.

The track is actually about haunting heartache and unlike his previous No.1 hits, “Redneck Crazy” and “Whiskey In My Water,” it digs deep into his past and his aching voice over the strumming guitar makes it a genuine, heartfelt track, one that is sure to be one of the most memorable releases this year.

The story develops as the source of heartache is uncovered. “A guys walks into a bar, orders a drink—sees a girl that catches his eye,” he croons over electric riffs, “asks her if she wants another. They fall for each other and end up lovers. They laugh, cry, hold on tight, make it work for a little while. Then one night her taillights fade out into the dark, and a guy walks into a bar…”

The song was written by Brad Tursi and Jonathan Singleton and holds true to contemporary country with its rock/pop fusion that still remains organic and true to the core of its lyrical depth.

Check out the track here.