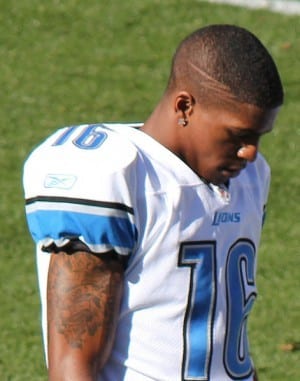 Athlete arrested for third time in a week

Titus Young, former wide receiver for the Detroit Lions, was arrested for the third time in a week early Saturday morning. Officers responded to a call from a San Clemente, Calif. homeowner shortly before midnight on claims that someone had broken into the home. When officers from the Orange County Sheriff’s Office arrived, Titus Young fled on foot and resisted arrest, throwing several punches in the scuffle.

Speaking of Titus Young’s most recent altercation, Orange County Sheriff’s spokesman, Lt. Joe Balicki, told reporters, “There was a brief struggle. He wanted to fight with the deputies. They ended up subduing him.”

Trouble began for Titus Young on Sunday, May 5, when he was arrested twice in a 15-hour span. Shortly after midnight, Titus Young was arrested for suspicion of driving under the influence. After being booked and cited, he was released. However, the bad decisions didn’t end there, as Titus Young climbed a fence and broke into the impound lot where his Mustang had been towed after his initial arrest. He was taken into custody again and booked with attempting to steal his own car.

Titus Young is more famous for his wild antics on –field and off-field, than for his actual skill as an athlete. He was released from the Detroit Lions in February for behavioral issues that included punching a teammate, refusing to run drills properly on the field, and in an attempt to claim his title as a celebrity, unleashing vitriol on every social media outlet available.