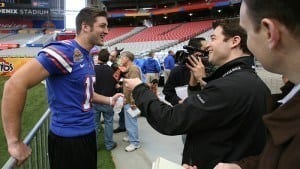 The quarterback hints at a possible future in politics

Tim Tebow is one of the most talked about NFL players these days and his celebrity status may play well into the future. The New York Jets backup quarterback is known for his faith and personal convictions, a strong basis for what he may pursue after football—politics. Tebow recently told Vogue that politics is a possibility because, “I want to have a life that can help people.”

He still has football on the brain, but Tim Tebow is thinking about his future.

“I haven’t ruled [politics] out, “Tebow said. “It won’t be anytime soon in my future, but it’ll be something I’ll at least look at and consider one day.”

His celebrity status may help propel him forward, too. U.S. News reported GOP strategist Brian Hughes saying Tebow may have the upper hand if he wanted to pursue a career in politics because everyone knows his name.

“Many of the political newcomers have to face an uphill battle with name ID, so Tebow would have an advantage with that,“ Hughes said. “Beyond his celebrity status I think he emulates the values a lot of conservative voters look for. …He’s made some clear statements about his faith and social convictions.”

Those clear statements and actions off the field have definitely set him apart, and while his football fans would be sad to see him go, they can be reassured that he won’t be a stranger to the public eye.