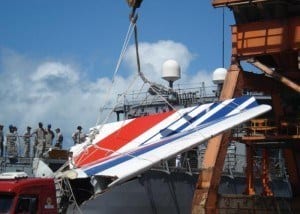 Yesterday, the French agency BEA declared its final report on the Air France 447 accident in June 2009. The French government investigation stated that the crash of Air France Flight 447 was a result of pilot errors in the wake of technical problems.

Although the report acknowledged the mechanical failures on the flight, the French agency BEA is resting the weight on the pilots’ shoulders. According to other pilots, after the plane was already plunging toward the ocean, the Air France 447 pilots should have pointed the plane’s nose down rather than up. Pointing the nose down would have restored lift in the plane’s wings and could have possibly saved Air France 447.

Although the pilots could have done something different in order to try and save Air France 447 and the 228 lives that were lost, the fact remains that the crash began with mechanical failure. Minutes before the pilots lost control, the pilot tubes became covered with ice and stopped working. The pilot tubes tell the pilots their speed in order for them to stay within the narrow window of speed that is required to stay in the air. When the pilot tubes froze, the pilots were unable to determine the plane’s speed, resulting in Air France 447 to slip into an aerodynamic stall.