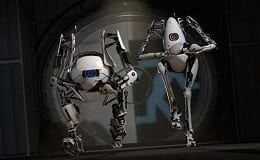 From nostalgic fighters to quirky rhythm games, these are April’s must-play titles

The total list of game releases for April feels downright anemic compared to the onslaught of high-profile releases in March, but it gives us ample time to whittle away at our backlog while still experiencing some of what April has to offer. As we do each month, we’re rounding up our top five most anticipated releases.

What “Street Fighter IV” did to revitalize the trademark Capcom series, “Mortal Kombat” 2011 looks to do for its legendary fighting franchise. Our hands-on time with the 2D fighter gave us a swift feeling of nostalgia, instantly putting a smile on our “Mortal Kombat”-loving faces. The animation and move execution was beyond smooth, and the title utilizes the power of the current generation of consoles well. The first true entry in the “Mortal Kombat” saga this generation (we’re not counting “Mortal Kombat vs. DC Universe”) looks to impress in terms of game play and graphics. Also, God of War fans can’t help but love the inclusion of Kratos as a perfect fit to the MK universe. All signs point to this being the game that fully rights the direction that the franchise is heading after last generation’s utilization of a 3D fighting engine and weapons left “Kombatants” with mixed opinions.

PON PON PATA PON! Without question, one of the most original and whimsical rhythm games to grace the PSP (or any system) is Japan Studio’s “Patapon.” With games like “Ape Escape,” “The Last Guy,” and “Loco Roco” under its belt, this development team understands quirky, addictive games. The latest sequel continues the colorful, silhouetted look and classic rhythm action game play, but introduces co-op and competitive online multiplayer, a feature more developers need to implement in the PSP’s twilight hours.

When the original “Portal” was released in 2007 in the Orange Box, all indications said that it was just another throw-in product to help out “Half-Life 2.” However the puzzle-platformer soon gained huge amounts of critical acclaim for the unique portal warping concept and dark humor provided by robotic antagonist GLaDOS, who was called the greatest video game villain of all time by IGN. The announcement of “Portal 2” created shock waves across the gaming community, but the biggest part of the announcement was the price tag. Because the original was intended as side-title, it was relatively short, with a low price of $15. “Portal 2” was announced to be a full $60 game. How many new physics mechanics did the designers at Valve add? Exactly how long is this game going to be? Of course, is it actually going to be worth $60? We think so, but only time will tell.

To say that “SOCOM 4” has a lot going for it is an understatement. Sony’s long-running tactical shooter sports a 12-hour single player campaign, Playstation Move Support, 32 person online multiplayer, and it heralds the needed return of Zipper Interactive. We’re loving that Zipper took a page from Naughty Dog’s “Uncharted 2” and recorded the voice actor’s movements and dialog in the same room, allowing for more believable character interactions. We’re loving that the team took the time to deliver us a promising Beta. We’re loving their attention to detail with enemy AI, ensuring that unlike “Call of Duty,” enemies won’t be bullet sponges but instead worthy adversaries. Most importantly, we’re loving that with the included Classic Mode we can turn off all those wimpy features like regenerating health and respawning.

“The Conduit” may not have been a critical darling, but it gave players an unprecedented amount of control customization, and pushed the Wii hardware to its limits. With “Conduit 2,” High Voltage Software has funneled tons of community feedback into both the single player and multiplayer presentation. The All-Seeing Eye scans faster, pre-rendered cut scenes and much more dialog now augment the story line, and you can look forward to a whopping 14 multiplayer modes spread across 12 maps. Those aren’t even numbers “Call of Duty” or “Halo” can claim. Perhaps, most importantly, this gives publisher SEGA one last shot at a successful FPS on the Wii, and a much-deserved sequel to an underrated game for fans of the original.

What about you? Do any of these games demand purchase? Is there something missing on the list that you’ll be picking up this month?