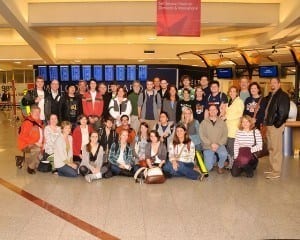 Are you hesitant about the breakless transition from high school to college because you feel burnt out or unsure about which career to pursue? Despite your parents’ thinking, taking a year off, also known as a gap year, before officially becoming a freshman may help to further define your goals. And with certain schools now offering subsidized gap year programs, you could have the chance to see the world and experience new cultures at lower costs.

Compared to 2006 data, the American Gap Year Association reported that gap year programs experienced a 20 percent increase when approximately 40,000 American students participated in such programs in 2013. While gap years have previously been more popular in Europe, U.S. schools are beginning to pay students to travel, volunteer or partake in internships nationally or abroad before entering college.

Most recently, Tufts University created plans for the “Tufts 1+4” curriculum to be launched this fall, in which the university will foot the bill for housing, airfare and visa costs while students are away. With such fees sometimes exceeding $30,000, Tufts hopes to provide this opportunity to students of all income levels and allow them to explore opportunities that may have otherwise been unattainable.

Other schools with programs similar to Tufts’ include Princeton University, St. Norbert College and the University of North Carolina.

“I think that students need sabbaticals at least as much as professors,” said The New York Times columnist, Nicholas Kristof, to Newsweek after his son Gregory visited China and Peru through Harvard’s gap year program. “I think if more universities encourage gap years, then probably fewer freshmen would spend their first month in college in an alcoholic haze.”

Not only can time away from the classroom reduce the possibility of early drinking habits, but experts say it also improves academic performance and shapes students into more mature, independent, motivated and worldly individuals.

“We often develop most when our understandings of ourselves and the world around us are challenged – when we engage with people and ideas that are different,” said Joe O’Shea, director of Florida State University’s Office of Undergraduate Research, in his article “Don’t go to college next year.”

Although universities promote a liberal arts foundation for expanding students’ worldly perspective, O’Shea feels that the classroom is “limited” in what can be offered.

If you are interested in taking advantage of a paid gap year program, research available opportunities at your chosen school and necessary steps for applying. To make the best use of time, prepare a plan detailing what you would like to learn, where in the world you hope to be situated, what tasks you want to complete, etc.

As tempting as it may seem to spend your days watching “Seinfeld” reruns while overlooking the Taj Mahal, your activities should instead be meaningful and help you gain skills that could not be acquired in a classroom.

Upon returning to campus, you will feel refreshed and ready to hit the books once again