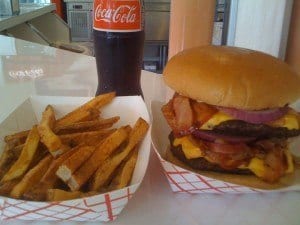 The Heart Attack Grill is proud of their reputation for serving food that is bad for your health, boasting slogans like “Taste worth dying for.” So it’s no wonder customers thought they were part of a publicity stunt when a man dining on a “Triple Bypass Burger” began suffering from actual heart attack symptoms earlier this week.

The Heart Attack Grill wheels out—on actual wheel chairs—items like the “Single,” “Double,” “Triple,” and “Quadruple Bypass Burgers,” the latter weighing in at 32 ounces of beef and served up with 20 strips of bacon. The Butterfat Shakes are made with pure cream, and the Flatliner Fries are fried in pure lard.

A sign on the door at the Heart Attack Grill reminds customers that it is a cash only establishment, “Because you might die before the check clears.” If you weigh over 350 pounds, don’t worry about hitting the ATM. You eat for free.

The man, who is recovering in a Las Vegas hospital, began to complain of chest pains while eating his burger. A “nurse”, the name given to waitresses at the Heart Attack Grill, said that the man began sweating and shaking.

The owner of the Heart Attack Grill, Jon Basso, called paramedics immediately. Basso refers to himself as Dr. Jon, and his customers are called “patients,” but the incident was not part of the role-play.

Confused patrons took pictures and video of the man suffering the heart attack, a lot of them commenting that they thought it was all an act.
“Tourists were taking photos of him as if it were some type of stunt,” Basso said. “We would never pull a stunt like that.”

Although Basso said he hopes the man is OK, the Heart Attack Grill has not indicated that they will not be changing their menu any time soon. After all, customers are given fair warning by the sign on the door: “Caution! This establishment is bad for your health.”