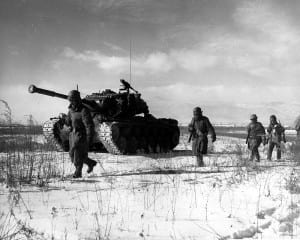 One night while I was still in community college my father asked me if I had ever hear of the Battle of the Chosin Reservoir. Of course I had! After all I was a lifelong history buff.

The Battle was part of the Korean War. In June 1950 Communist North Korea invaded U.S. backed South Korea. It was a brutal war, full of suffering and atrocities on both sides.

By November of 1950 U.N. and South Korean forces had landed at Inchon, retaken the southern capitol of Seoul, and driven the North Koreans all the way to the Chinese border.

The Chinese Civil War had recently ended in Communist victory. In the fall of 1950 the new government decided to intervene and poured over the border. Many of the shocked U.N. troops retreated, but at a cold place known as the Chosin Reservoir U.S. Marines, U.S. Army troops, South Korean forces, and Royal Marines were cut off and surrounded. Outnumbered in the bitterly cold Korean winter their fight to reach evacuation at the sea roughly 70 miles away is one of the great stories in military history.

For me it was the stuff of the History Channel documentaries that sparked my fascination as a child. It was maps, medals, heroic stories, black and white footage of Marines marching in the snow. The interviews with veterans left me with the intellectual sense of the cruelty and hardship of war, but rarely did it truly sink in that these were real people who suffered.

I think when I was young it hard to emotionally distinguish between the characters in movies and documentaries. I glamorized war in my mind. I mean what kind of kid doesn’t want to be a hero when they grow up? The way I saw it these veterans were the ultimate heroes, and what could be better than that? I saw them in my mind as I saw the heroes of my favorite movies. Some men died, some were wounded, but the brave faced soldiers fought to the last and emerged victorious. Their commander would give an inspirational speech, all the important people survived, and they went home chest full of medals to bask in the glory of their achievements.

It was a big influence on my life. I joined a military youth program and spent my teenage summers marching and polishing shoes. I once aspired to attend the Naval Academy, but that is the stuff of other articles.

I told my father I had heard of the battle, and he told me he had a friend who was a veteran. My first thought was I had to meet him and write a story about his experiences. My enthusiasm stemmed from the fact that I worked for my college’s newspaper, and I was hungry to find a good story to write and publish in a professional publication.

My father introduced me to his friend Glen Hagler, and he agreed to take me to a meeting of a group of survivors of the battle.

On March 18, 2012 I attended the meeting of the Chosin Few, Col. William E. Barber Medal of Honor Orange County Chapter. That day I sat and talked with the men who lived it. They were happy to tell their stories

“Chosin was hell,” said Bob Licker, a New Jersey native who served with the 1st Battalion, 7th Marine Regiment. “It was freezing. You couldn’t dig in, you couldn’t get yourself warm.”

Licker’s path to Chosin started at his high school. His teacher, a survivor of the World War II Battle of Iwo Jima, inspired his whole class to enlist in the Marine Corps Reserves.

“Never thinking that there’s gonna be a war cause World War II had just gotten over a few years before that,” Licker said. “We would go to summer camp. We would play rifle company out in the wood in New Jersey where I came from, and then Korea broke out.”

Hailing for Garden Grove, Calif. Headquarters Company, 7th Marine Regiment veteran Duane Stout was a recent high school graduate. His inspiration for joining the Marines was a lack of jobs and the fact his brother served in the Marine Corps. Stout’s service in Korea took him to the Battles of Chosin and Seoul before landing at Wonsan and ending up at Chosin.

It was in interviewing Stout that I started to get a taste of how brutal the Korean War really was. He described the North Korean defenders of Seoul as hard, tough fighters who believed in that which they fought for.
“You had to kill them, they wouldn’t surrender,” Stout said. “We wouldn’t take them anyhow.”

It was a fairly stunning revelation.

“We didn’t do prisoners,” Stout said.

I had heard of disturbing things such as this happening during the war, but this was the first time I met someone who had come face to face with it. Now the war was off the screen, off the page, and I was seeing the real memories of the horror laid in front of me.

I tried to imagine what a war like that would be like. I believe nearly impossible to truly picture it. All the same I tried, and what I pictured in my mind was a young Duane Stout who shortly before the war had been living in New Jersey, going to school, and living life as normally as any of us can live it. I pictured him going to Korea, and I pictured all that he had told me. I felt profound sympathy that he had to suffer, I felt sadness that such terrible things occurred, and I felt respect for a man, a man in real life and not on a screen, who went through that kind of horror for their country.

Robert Ezell was another former Marine I met that day. His unit, Fox Company, 2nd Battalion, 7th Marine Regiment wrote a special chapter in the history books at Chosin.

Before Korea Ezell was a baseball player from the Wilmington neighborhood of Los Angeles. He was good enough to be signed by the Boston Braves, but he played in the California State League rather than the majors.

Ezell’s company would end up defending a hill controlling a vital pass during the battle. Their commander, then Capt. William E. Barber, would become the veteran’s chapter’s namesake. The hill they defended came to bear the company’s name, Fox Hill. His unit was cut off from the rest of the UN forces at Chosin for five days. When the fight for Fox Hill was over about 1,000 Chinese troops had been killed according to Capt. Barber’s Medal of Honor citation. Ezell claims he overheard who he thinks was an officer say at least 3,000 Chinese soldiers were killed, 2,000 in Fox Company’s perimeter and 1,000 further away by supporting artillery, air power, and mortars. Capt. Barber’s Medal of Honor citation also states that just 82 out of Fox Company’s original 220 Marines walked off the hill with the rest being killed or wounded.

This tale reminded me of the heroics I was so enamored with as a kid. Perhaps war was more like what I used to imagine? Ezell taught me that even the most glorious of military triumphs has a terrible price.
“Me and my foxhole buddy got wounded in our legs,” Ezell said. “I lost some toes from the cold.”

In the same action he was wounded the gunner on Ezell’s machine gun was shot and wound up losing a left hand. The suffering at Chosin extended beyond just bodily wounds.

We as civilians are not trained to accept the permanence of death in war. Think of our popular culture. In many film’s his friend’s death would be character development for Ezell. Know that this death was not character development. This is a real person who lost their life, and their real best friend has to deal with that for the rest of his days. I found as I interviewed these veterans their stories became more and more nightmarish.

Stout’s said the attacks would come at night to avoid the U.N.’s air cover. He said the fighting would get so close some Marines and Chinese soldiers fought with their fists. Stout said that unlike with the North Koreans, the Marines had more respect for their Chinese opponents. This included the area of prisoners.

“We treated them better,” Stout said. “They treated us better.”

“You didn’t die of bleeding, you died of blood coagulating, and you froze to death,” Licker said.

Licker described the Chinese using mass attacks against the Marines.

“One had a machine gun, burp gun, one had ammunition, one carried grenades, and one carried a stick,” Licker said. “If the front guy died the next guy picked up the ammo or the gun and just kept going.”

The civilian’s suffering during the war didn’t go unnoticed by the Marines.

“Civilians are going to get killed, that’s just the way it is,” said Duane Stout. “They don’t get away when they should. They should not be there, they get caught in the middle and they die.”

Robert Ezell described Korean civilians coming through the Marines’ road block fleeing Communist forces. He said when the Marines were evacuated at Hungnam over 100,000 civilians came with them.

Despite all their suffering I marveled at the modesty the Marines showed.

“It was no fun, but…it was…I’ve had a good life I can’t complain about that,” Ezell said in regards to his injuries. “I’m able to walk and navigate around, and I was able to run even.”

Eventually the U.N. forces reached the sea and rescue. Thousands of U.N. and South Korean troops had been killed, wounded, or captured. The freezing temperatures accounted for many of these casualties. Chinese casualties were far worse.

“The experience I gained from that I would never have traded with anybody, but if you ask me to volunteer to do it, no,” said Bob Licker.

Duane Stout asserted that the war was necessary to contain communism lest it spread through Asia.

After the war the veterans I interviewed went on to live normal lives.

My father’s friend Glen Hagler became a police officer after the war.

Bob Licker served in Korea after Chosin and came home Christmas Eve, 1951. He became a technician for an aerospace company.

I suspect that you would never know that these people had gone through an experience of such magnitude.

How do we honor them? How do we tell their story?

There are plenty of good examples of how it’s done. Ken Burn’s “The War” did a good job of capturing the suffering and complexity of war, but for every good one we get so many bad ones. We get documentaries, articles, book, films, and television shows that are cursory and sanitized. Perhaps we should look to films like “Saving Private Ryan,” or “Twelve Years a Slave,” to show us how to portray history. Yes these films are brutal, but they are also honest. They force us to confront the past for what it was, and see as close as possible what it was like for the people who lived it.

This is what I needed to see growing up. Once I talked to the Chosin few and got this real history I found my respect more profound, my appreciation deeper, and my empathy greater.

This is what these men, who history knows as the Chosin Few, deserve from our society.