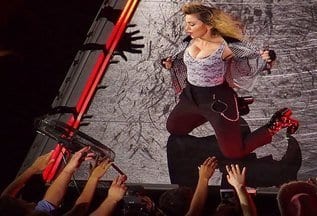 I’ve never been much of a Madonna fan, that was until this The Rebel Heart Tour review. I guess I’ve never really thought about it. I went to a Catholic school and if Madonna was ever mentioned it was about how “sacrilegious” or controversial she is or how “weird” it was when she kissed Britney Spears and Christina Aguilera  at the 2003 MTV VMA’s when I was in eighth grade.

Now, as an adult in my mid-twenties I decided to acquaint myself with the “Queen of Pop”. Upside of a press job: I have opportunities to attend some truly amazing concerts. Downside: I have to go alone #VogueAlone. Not really knowing what I was getting myself into I showed up to Chicago’s United Center unaware of what exactly was in store.

All of a sudden, Michael Jackson’s “You Gotta Be Starting Something” started blasting, it was showtime. People were dancing in the aisles of the packed stadium, when the lights dimmed and the curtain fell. The audience’s energy was palpable. I found myself getting extremely excited. Then armed guards mount the stage and a movie starts to play on the jumbo screen. Madonna appears onscreen and people scream like she just surprised them at work. She is dressed in exquisite formalwear and trapped in a cage. The movie then cuts to a caged man. “Is that Mike Tyson in a cage?” are the curious whispers I hear around me. It sure is. The movie then cuts back and forth from the armed guards, to Mike Tyson, to Madonna, to Madonna and Mike Tyson as lovers, all the while a bellowing voiceover plays of Madonna gearing up for a revolution. Movie-Madonna is shown in a badass warrior outfit then she is lowered in a cage onto the stage IRL. Samurai theme GO!

Back up dancers sporting black lipstick rip off Madonna’s red overcoat and she fans herself with a red fan. She proceeds to kick all the armed guard’s butts while singing “Iconic”. My heart is racing, this is an action movie in front of my eyes. She strips off her coat and rips off her pants to reveal thigh high stockings, “Bitch I’m Madonna” she sings. Then someone hands her an electric guitar and she starts shredding “Burning Up”. She reaches out and touches an audience member who then fist pumps his hand powerfully into the air like the ending of The Breakfast Club; he has been touched by the Holy Ghost. I’m getting goosebumps.

Church bells begin to chime, “Holy Water” begins to play and Madonna, who is halfway hog-tied, breaks free form her restraints. An attractive priest appears onstage and sits in a chair as Madonna slides on the floor over to him. I went to Catholic school for my entire education but I can’t help but hope she gives this priest a lap dance. What has come over me? I plan in my head to seek out the closest water fountain after the show is over. Meanwhile, nuns are pole dancing. Madonna crawls back upstage toward a reenactment of the Last Supper. I am freaking out with glee; the show started 20 minutes ago and I’m already all in; zero to sixty. We hear “Vogue”, “Devil Pray”, and “Messiah” before every Religious Education teacher’s nightmare ends.

The stage transforms into a bodyshop, possibly a nod to her Detroit roots, she sings “Body Shop”, “True Blue”,  and “Deeper and Deeper”, before running over to a spiral staircase to perform “HeartBreakCity”. Already we have gone from Japan to Jesus to cars and now cowboys as a hoedown, line-dancing version of “Like a Virgin” is happening with a solo Madge onstage. “S.E.X” comes on and Madonna is absent from the stage aside from her face on the jumbo screen. Four beds appear upstage and eight of her backup dancers, coupled up, dance in and on the beds.

She’s back, this time wearing a long hooded cape with a train, embellished with a glittering “M”.  She’s singing “Living for Love” when the cape is yanked off of her and sucked into the stage. Madonna is wearing a matador outfit surrounded by her back-up dancers dressed as bulls. Matador bullfighting ensues!

Flamenco theme is up next and the audience goes wild for “La Isla Bonita”.

Outfit change to a flowy, flower-embroidered dress and hat to sing  a medley of “Dress You Up”, “Into the Groove” (with a salsa flavor), and “Lucky Star”. After the songs, the dancers sit around ripping (fake?) tequila shots. Madonna begins to chat with us and sings an acoustic version of “Who’s that Girl”. As she is looking out into the crowd she notices a hole in the audience near the stage, over the microphone she declares, “At my show where there’s a hole you have to fill it”. We laugh because we are all friends now and have dirty minds. “C’mon Mr. Security Man, I want to be close to people”. Ecstatic fans rushed forward to fill the hole and be closer to her.

She then sings “Ghosttown” and after talks with us some more, “in order to start a revolution” she says, “you need to have a rebel heart.” She asks us, “Bitches are you in my gang?” Yes, yes I am.

She then tells us her favorite part of the show is coming up. “Thank you to all my rebel hearts” she says before she sings the tour’s title track, “Rebel Heart”. The jumbo screen is showing fan’s artistic renditions of Madonna; her favorite part.

My friend, Madonna, then exits for a costume change.The backup dancers bring out poles reminiscent of the ones the nun’s used while pole dancing. The dancers climb the poles until they are standing at the very top of them, their feet resting on a little cross. They buckle themselves in and fall backwards. (WTF!) The pole bends with them and snaps them back up into a vertical position before falling forward due to the swinging momentum. The poles bend while the dancers move back and forth as if they are some sort of bendy, rubber-like metal anchored to the ground. I don’t know how this is happening, I’m not a scientist! The audience is losing their shit. Apparently “Illuminati” is playing but my brain is too busy being equal parts amazed and worried for the dancer’s safety. The dancers pick up speed swinging on the poles bending deeper and deeper and high-fiving audience members.

Madge returns, for “Music” and ”Candy Shop”. Then the jumbo screen moves into a slanted position as Madonna and the male dancers stand at the very top. She begins to sing “Material Girl” as she pushes the boys down the slanted jumbo screen stage one by one. She then slides down the screen herself and immediately begins to walk down the catwalk-aisle in a veil as if she were in a wedding. She throws her bouquet to a couple in the audience and makes them kiss. “Yaaaaas bitch!” she screams. “It all goes downhill from here!” She warns the couple with a wicked smile.  Chatting with us again, she tells us she’s married to us because we are who she writes her songs for and  who she spends all of her time with. She isn’t only bitter about marriage, though. She’s still in love with being in love she tells me…and I suppose everyone else at the United Center.

She sings “La Vie en Rose” sweetly, which is followed by “Unapologetic Bitch” (gotta love that timing). Cue the costume change into a black lacy number with a American flag cape. Madonna is surrounded by her whole ensemble for “Holiday” as she brings the house down.

The phenomenon and culture of Madonna is unparalleled. Fans come dressed to the nines or in lavish costumes (my personal favorites: a man in a crystal bull mask and another man in a nun’s habit with the word “bitch” plastered on it) neither of which is out of place. A Madonna show is the total package; from her dancing (she began her career as a professional dancer), to the backup “dancers”, who are more like backup performers, to her multiple themes, intricate costumes, and her quality time talking with the audience. My first Madonna experience was mind-blowing. She and I are now best friends. Not once did I notice I was alone. Now, where’s that drinking fountain.

You should also read:Drake Announces Surprise Six-City Tour With Future