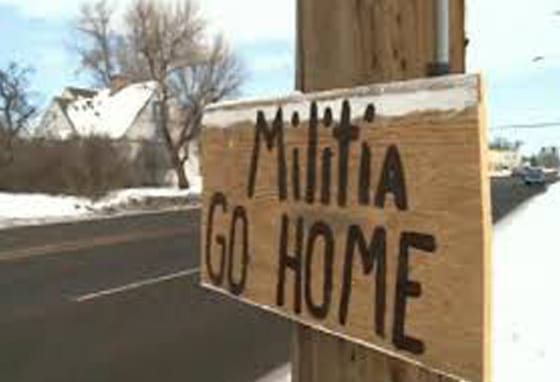 What does the Oregon federal building standoff really indicate?

The Oregon federal building standoff reveals an institutionally perpetuated process of exploitation that sustains a system of wealth, power, and privilege in our society. This system maintains that European immigrants are superior, are entitled to all material resources and should dominate and rule society. The standoff at the secluded federal building near Burns, Oregon is the latest example of how domestic terrorism is fueled by white supremacy.

On January 2, 2016, dozens of armed white militants occupied the Malheur Wildlife Refuge in protest of the conviction of two ranchers charged with arson. The Oregon federal building standoff militants demand the release of two ranchers and that the surrounding federal lands cede local control. The ranchers were sentenced twice for their arson crimes under the provision of a law called the Antiterrorism and Effective Death Penalty Act of 1996. The militants claim that these ranchers have been oppressed by the federal government and hope to draw attention to their cause.

You will also like: Already Decided to Support Bernie Sanders? Perhaps it is Time to Reconsider

The charges in question stem from a pair or fires on federal land near their ranch. According to Rolling Stone Magazine, the first fire was reportedly set in 2001 to cover up evidence of illegal deer poaching. The fire burned 139 acres. The second was reportedly set in 2006 to protect the ranch from an approaching wildfire, stated Tim Dickinson. The first federal judge to handle the case ruled that the sentence was too harsh and gave the pair a lighter sentence, which they served. However, the U.S. attorney in the case challenged the ruling and the federal government took the rare step of appealing the sentence adding to the ongoing tensions between the federal government and the Western ranchers.

These tensions have developed from a 20-year legal dispute over unpaid grazing fees on federally owned land. In 2014, an armed standoff between supporters of Cliven Bundy and the federal Bureau of Land Management sparked controversy when 145,604 acres of federal land in Clark County Nevada were temporarily closed for the removal of trespass cattle. Bundy currently owes the federal government more than $1 million in unpaid grazing fees and fines. Now his sons, Ammon and Ryan Bundy, are responsible for leading the militant standoff in Oregon.

With the armed occupation of the federal wildlife refuge in Oregon approaching its thirteenth day, a local Native American tribe discussed the militant groups sense of entitlement to the land. The Burns Paiute Tribal Chairperson Charlotte Rodrique said that the militants are “desecrating sacred property” and that the wildlife refuge is Paiute ancestral land. She denounced the militants and demanded that they leave, stated NPR reporter Merrit Kennedy. “You know, who are the rightful owners?” said Rodrique. “It just really rubs me the wrong way that we have a bunch of misinformed people in here — they’re not the original owners.”

As the Oregon federal building standoff continues, it is clear that there are many mixed opinions about the armed occupation. An understanding of how the Oregon militants are able to justify their actions in the pursuit of their political agenda may be an essential factor in determining a peaceful resolution. In the meantime, the Oregon militant standoff continues their display of supremacy as the group remains adamant toward their position of entitlement.

You should also read: Paul Ryan takes the position as house speaker