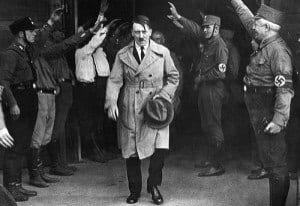 I don’t know what’s more embarrassing, the fact that the students at Thailand’s premier university are ignorant of Hitler or the fact that they painted him alongside superheroes in a mural that said “Congratulations” to the graduating class.

The billboard was placed outside of Chulalongkorn University, one of Thailand’s best universities, as a tribute to the graduating class this year. The huge mural showed Hitler with his arm raised in a Nazi salute next to superheroes such as Iron Man, Captain America and Superman with “Congratulations” written across the top.

“(We) would like to formally express our sincere apology for our students’ ‘Superhero’ mural,” Disatapundhu said. “I can assure you we are taking this matter very seriously.”

After questioning the students that created the poster, he said that their excuse to the painting was that they wanted to show that good and bad coexist in the world.

“They told me the concept was to paint a picture of superheroes who protect the world,” the dean said. “Hitler was supposed to serve as a conceptual paradox to the superheroes. This kind of thoughtless display will not happen again.”

While Hitler was painted in subdued hues compared to the other brightly colored superheroes, projecting Hitler next to these heroes is just a little too controversial and offensive.

The banner has already made its mark though, as an international Jewish human rights group, The Simon Wiesenthal Center, spoke against it on Friday.

“Hitler as a superhero? Is he an appropriate role model for Thailand’s younger generation — a genocidal hate monger who mass murdered Jews and Gypsies and who considered people of color as racially inferior,” Rabbi Abraham Cooper, associate dean of the group, said. “The Simon Wiesenthal Center is outraged and disgusted by this public display at Thailand’s leading school of higher education.”

With further investigation it was found that the university focused primarily on Thailand’s own history and barely goes over world history. Now hopefully they’re taking the matter seriously enough to the point where they’ll educate their students on the horrors of the Holocaust and the genocide that Hitler supported and pursued.