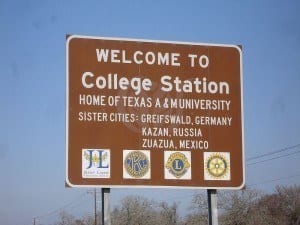 The shooting took place on Fidelity Street down the street from the Texas A&M campus.

Shots were exchanged between law enforcement officials and the gunman. Shortly thereafter police took the gunman into custody and Cafall died.

One of those killed was Brian Bachman, Brazos County constable. Cafall shot the constable after he approached the gunman’s home.

The third person killed was a bystander, Chris Northcliff, 43. Two of those injured included a police chief of the Texas A&M area, as well as a female civilian, who underwent surgery the night of the shooting.

Rigo Cisneros, a neighbor living across the street near Texas A&M, took a video of the incident from inside his home, while taking cover.

Everyone in the Texas A&M area were advised to stay indoors and away from Fidelity Street.

The loss was a heart wrenching one for the College Station area, as Bachman was a celebrated individual, having been a sheriff’s deputy since 1993, according to CNN.

Scott McCollum, an assistant chief at College Station said, “He was a pillar in this community, and it’s sad and tragic that we’ve lost him today,” referring to Bachmann.

Signs of the approaching devastation could be found on Cafall’s Facebook page. According to CNN, he expressed a profound interest in guns and fighting on the social medium.

Cafall wrote that, “People sleep peaceably in their beds at night only because rough men stand ready to do violence on their behalf.”

Cafall also exhibited photos of firearms on his page, and shared that his inspirations were several firearms designers.

Cafall’s mother, Linda Weaver, joined those grieving the losses of their loved ones in the Texas A&M shooting.

Weaver said, “We mourn them and the loss of Tres. He had been ill. It breaks our hearts his illness led to this.”