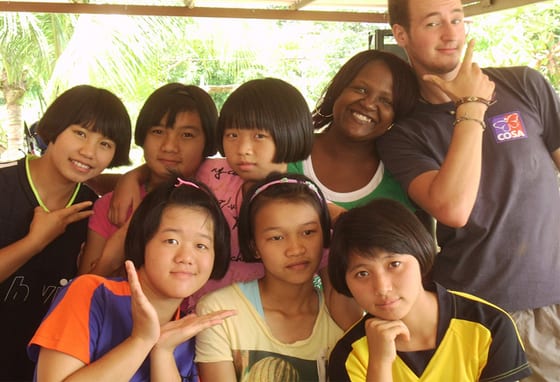 As graduation nears, you might notice more and more ads in your Google and Facebook feeds enticing you to teach English in China or Japan. Maybe you already have a lucrative career planned, or perhaps you’ve already had enough exotic foreign travel to scratch that itch. But for a certain type of pending (or recent) college grad, teaching English in a foreign country is a definite career possibility. Is it an option for you?

As employment possibilities go, this one has surprisingly few barriers to entry. Most prospective employers want somebody who:

·      Is a native speaker of English, from the United States, United Kingdom, Ireland, Australia, New Zealand, Canada or South Africa

Do you like working with children? Many unsuspecting teachers have signed contracts believing they’d be working with college-age students and older, only to be surprised by a classroom of kindergarteners awaiting them. If you prefer working with a particular age group, make that very clear ahead of time.

If you teach in east Asia, some countries are more touristy than others. But from Seoul-Incheon Airport, flights to Japan, Hong Kong and Thailand are a lot cheaper than from out of New York or Los Angeles. And while Americans are barred from teaching in Western Europe (Those gigs are set-asides for European Union citizens), Paris and Rome are a cheap train ride from Poland, Hungary and the Czech Republic and other parts of Eastern Europe where teaching jobs are still available.

Some countries pay a decent wage and provide housing, but can be expensive to live in. These include Japan, South Korea and Saudi Arabia. Others pay $1000 a month or less, including Russia, Eastern Europe and pretty much anywhere in Latin America, and you may have to find and pay for your own apartment. These places are cheap to live in, which is great for a year or so. But if you’re sending half your paycheck to your bank in America, there’s a difference between sending $500 and sending $1600 every payday. Many teachers supplement their income by selling their services as a private tutor, even though their contracts specifically forbid it.

As a foreigner, you’re on the police’s radar, and they’re almost looking for an excuse to put you on a plane home. Over half of teachers who get fired, deported, or both are due to alcohol-related offenses. (As a rule of thumb, make sure your last drink and your earliest class are at least eight hours apart.)

While some foreign teachers work in “real” schools, most do not. The greatest demand is from hagwons, or after-school ”cram” schools; the closest American equivalent would be those Kaplan SAT prep schools. Hagwons are businesses unaffiliated with any school system, often run by businessmen who speak little or no English. These are a big business in Asia, where speaking English is often the dividing line between a professional vocation and a blue collar one.

Some teachers make a career out of expat travel. Others just do it for a year or two while putting off law school or something equivalent. If it’s something you might be interested in, your first step should be a TESOL/TEFL/CELTA course, which typically costs about $1000 for 100 hours, then look at the job postings on http://www.daveseslcafe.com and start e-mailing cover letters and resumes. Sure, you could backpack across Europe and live out the lyrics to “Eurotrash Girl,” but teaching abroad looks a lot better on a grad school application!

Previous ArticleSyllabus Week: What Students Don’t Want to SeeNext ArticleStand Out From Other Job Seekers: Become a Volunteer!