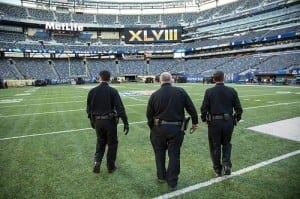 An unknown source has mailed several envelopes containing a suspicious white powder to hotels surrounding the site of this year’s Super Bowl.

More than five hotels have received the same envelope, including the Renaissance Meadowlands Hotel, Homestead Inn, Econo Lodge and others around MetLife Stadium.

Bomb squads and hazmat teams were called in to investigate the suspicious contents.

Another envelope was sent to former New York mayor Rudy Giuliani’s consulting firm in the Rockefeller Center. Roughly eight people were detained and held for decontamination after the envelope was opened and found to contain the same type of white substance.

Police have yet to decipher where the envelopes came from and if the powder is dangerous. Sources close to the scene suggest that one or two of the envelopes may have been filled with harmless baking soda or corn starch. The other powders have yet to be confirmed either way.

Police fear the substance could contain Ricin, Anthrax or another harmful chemical.

Federal officials state that they believe the same source is responsible for all of the letters. Workers of the scene are going through extensive tests to isolate and decontaminate potential threats.

This year’s Super Bowl between the Denver Broncos and Seattle Seahawks will be held on Sunday at MetLife Stadium.