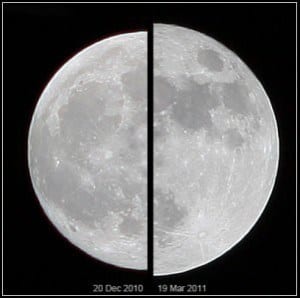 We’ll have a chance to see the supermoon Saturday, May 5

Supermoon— it may sound like something out of a 1950s sci-fi flick, but in reality, it’s the biggest full moon of the year, and we’ll have the opportunity to see it this Saturday, May 5.

The supermoon will occur at 11:35 p.m. EDT, although the moon may still appear full to observers the day before and after the event. The supermoon will likely outshine the annual Eta Aquarid meteor shower, which also hits its peak this weekend.

The moon orbits on an oval track. The average distance between the moon and the Earth is 238,000 miles, but when it’s on the closest part of that track, it’s called the perigee. During a perigee, the moon is a little less than 222,000 miles away.

The moon will appear to be as much as 16 percent bigger and about 30 percent brighter than other full moons that have occurred this year.
The supermoon does not pose a threat to Earth.

“Supermoons have been happening for billions of years, and nothing particularly special occurs on these dates—except, of course, a beautiful moon,” said Geza Gyuk, an astronomer at the Adler Planetarium in Chicago.

The closest lunar perigee of 2012 will occur just one minute before the moon falls in line with the sun (making it a “full moon”), so this supermoon will be even greater than the one in March 2011. The perigee and full moon fell 50 minutes apart during that supermoon.

According to astronomers and seismologists, earthquakes are not more likely during a supermoon. However, with the Kentucky Derby and Cinco de Mayo lining up with this year’s supermoon, it may be wise to take caution against the monthly phenomenon of “full moon crazy.” A cosmic exhibit mixed with margaritas and Mint Juleps could cause quite a show this Saturday.