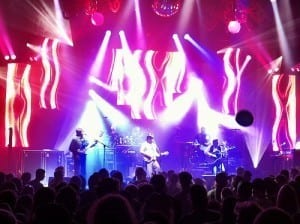 The jam band decides to scalp tickets to its shows themselves

String Cheese Incident is battling with Ticketmaster yet again in an effort to take a stand against ticket service charges. This time it’s personal as the band is literally scalping tickets to its shows.

String Cheese Incident, a jam band with a devoted following, has been trading blows with Ticketmaster since 2003 when the band sued the ticket distributor accusing the company of abusing its market power by denying the group more tickets than the 8 percent it normally allocates to performers. An agreement was reached in that case that allowed the band to handle the distribution of its tickets but that agreement has since expired.

The band believes, like many music fans across the board, that ticket fees, known as rebates in the industry, have become outrageously pricey. Fans have few alternatives when it comes to purchasing tickets and with Ticketmaster fees of 30 or 40 percent of the cost of an order it is no surprise some are taking a stand against the fees, more specifically, Ticketmaster itself.

One of the String Cheese Incident’s managers, Mike Luba, stated in an interview last week, “We’re scalping our own tickets at no service charge. It’s ridiculous.” Luba continued, “I would argue that on some level they are our tickets. If people in a free market find that Ticketmaster’s service is easier and more effective, by all means go for it. But we have found a group of people who are used to buying tickets directly from the band’s Web site.”

“If the tickets are 49 bucks, we want them to be 49 bucks when the kid buys them at the end,” reiterated Luba.

The band’s bassist, Keith Moseley, continued to elaborate on why the band is targeting Ticketmaster, stating, “It costs us money to sell the tickets, but we are going to eat that cost this summer in order to make a better deal for our fans and let them know how much we appreciate them.”

It is important to note that buying a ticket on the band’s Web site will cost an additional $12 to mail the tickets via UPS; however, the $12 is still less expensive than buying tickets through Ticketmaster.