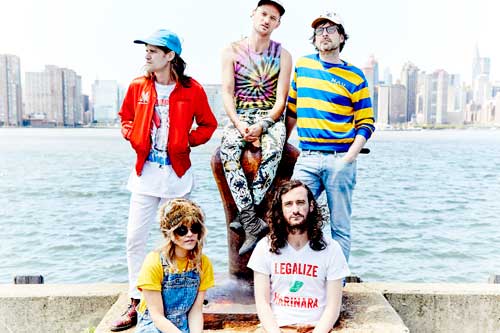 After the release of their critically acclaimed debut, “Volume I & II” (2014), fans and critics alike have been craving for Streets of Laredo’s latest album, “Wild”, to be released. It’s a fun and bouncy album with sweet riffs, melodic harmonies and just a splash of synthesizers. The instrumentals of Dave, Daniel and Sarahjane Gibson, Cameron Deyell, Sean McMahon, and Andrew McGovern keep the listener entertained and wanting more. Vocalists Sarahjane and Daniel switch their duties back and forth to bring the element of surprise every time.

Getting in to the album

The album’s opening track, appropriately titled “Wild” as well, starts off giving a slow-paced, yet inspirational sensation to the listener. With lyrics such as, “So we float down the river / out into the open / I said let’s go / Stepping over stones”, it’s incredibly simple and pleasing to be able to visualize the lyrics. It’s almost as if vocalist Sarahjane herself is grabbing the listener by the hand and saying, “Let’s show them Wild.”

Transitioning into “Hammer and the Nail”, there was a bit of a “Lion King” music feel to it—remember the movie’s opening track, where the entire kingdom gathers for the birth and reveal of Simba? The beginning feels as though it would fit properly here. Otherwise, here’s yet another perfect visualizing track with a kicking chorus, “I’m falling, falling, I’m see-sawing / Out of breath, ‘til I fade out of view.”

“Silly Bones,” without a doubt, has to be the one song that struck me as most memorable on this album. The track gives off a child’s-play, colorful vibe that makes the listener want to break down their very own bones. “I wanna take out all the ones that glow / So I can have meaning.” This sort of makes the listener look into their own selves and examine who they are, right down to the very core. It’s captivating, yet releasing.

Into “Trap for Young Players” there was an instant resemblance to Foster the People’s “Torches” (imagine how rad a Foster the People and Streets of Laredo tour would be?). Almost immediately, the comfort of a familiar sound was within, and it only shed more desire for the listener. By far, “Trap for Young Players” is the album’s catchiest track, a song to sing-along to, if you will.

Midway through the album, there’s a drawback from the upbeat, cavort-feel, into the accurately titled, “Laying Low” a staring-out-the-backseat-of-a-car-window-on-a-rainy-day vibe. Probably Street of Laredo’s most relatable track, lyrically, with second verse starting off with, “I don’t remember what I did last night / We start from scratch on Sundays”—a verse that I’m certain resonates with almost any and every college student and young adult. “Caught the Fire” gives off the same feeling, starting off with, “Trying to walk a line that I once lived in / Tripped out the window and then taken by the wind”. However, the most resonating line has got to be “You keep on walking ‘cuz you got nothing to show”, a lyric that, again, I’m positive relates to everyone at least once in their life.

Synth becomes prevalent in the track “99.9%”, bringing back upbeat instrumentals and melodies into the album. “99.9%” is a vital track, as its lyrics are both eye-opening as well as relatable: “You’ve been lied to, well I’ve been lied to, too / Not exactly sure when or if to believe you” and the most striking line, “Villains dressed in business stripes”. It’s a song that both points out the flaws within society and following authority, yet also draws attention to the fact that, in reality, nearly 100% of us humans wish for a better life. That’s why the following track, “Remedies,” feels exactly in place right where it is on the album. Another noteworthy track, “Remedies” lyrics both seem to connect to its preceding track and bring to life the vivid visualization again. Daniel’s vocals fit exceptionally well here, as both the lyrics and his voice have a powerful and forward message that echoes in truth and meaning.

“Tunnel Vision” brings back the slow-paced calm from earlier on—a duet track for Sarahjane and Daniel. The best way to describe this song is the feeling you get when you are actively aware of the hairs on your arms standing up on their own—it’s that jaw dropping.

Streets of Laredo continues with the soft and gratifying harmonies and instrumentals in “Doesn’t Even Bother Me”. This track essentially gives off that sort of vibe—like whatever is bothering you shouldn’t even bother you. This track from the album is one I’d highly recommend listening on a calm, starry night, with a few of your close friends and a warm cup of coffee to truly experience this song.

“Gold” has got to be one of the most brilliant album-closers ever. Another soothing track, but with uplifting and bright lyrics. “We can make gold with our hands,” screams the chorus, giving the listener a sense of control and dignity within themselves. The harmonies at the ending of this track—“We make a home / We let go / Night sky / Over / My head / Goodnight”—truly bring the entire album to a peaceful and warming close.

Overall, “Wild” is a brilliantly put-together record. It mixes everything from carefree and powerful lyrics, upbeat tunes, melodic and haunting instrumentals, vibrating vocals and everything else in between. There are very few artists able to collaborate different elements to create an album that still tells a story, and Streets of Laredo have done this seamlessly here.

You’ll also enjoy: The Baha Men are Back!

To learn more about Streets of Laredo, I had the fortune of interviewing Sarahjane on their new album, upcoming tour and more:

College News: What was the recording process like for “Wild?”

Sarahjane Gibson: It was pretty special. We recorded the bulk of the record up in Woodstock at Dreamland studio, which is a beautiful old church and inspiring place. It’s great to get out of the city to completely focus on the music.

CN: Are there any songs in particular on the album that you consider more connected to you in anyway, or do they each have their own connection to you?

SG: They’re all special for different reasons. “Silly Bones” is my favorite to play live, and it just feels really good to play. I have soft spot for “Wild” too — it reminds me to stay the course. You know, go hard or go home.

CN: Do you have any plans or celebrations for the release of “Wild?”

SG: We’re playing a show at the Brooklyn Bazaar. We’re going to celebrate the US release and the one week anniversary of it being accidentally released early in Australia.

CN: I see you guys are touring with CRX later this year, how are you feeling about that?

SG: CRX blew me away when I first saw them play. It’s great when you get to go out on tour with a band you’re really into. I also just love touring, so, yeah, feeling pretty good about the whole situation.

CN: Are there any cities in particular that you’re most excited to be in?

SG: I’m looking forward to LA, and hopefully getting to take a dip in the pacific. It always makes me feel connected to home.

SG: My favorite thing is late night drives listening to Coast to Coast and talking conspiracy theories.  My least favorite thing are the inevitable disputes over cellphone chargers.

CN: After being in the United States for so long, do you still feel like your New Zealand roots are harbored within you and your music? If yes, how so?

SG: “Definitely. Where you grow up can’t help but affect the way you see the world, and in turn what you want to say to it.”

CN: What’s been your biggest challenge within the music industry?

SG: It’s a cool time in the music industry.  There’s not so many gatekeepers anymore, but the flip side is finding a way to break through all the noise.

CN: If there is one thing you could change within the industry, what would it be?

SG: It would be good if the spoils of the music industry were more widely distributed.

CN: Do you believe success and talent are one collective entity, or are two separate entities?

SG: I guess it depends on how you define “success”. If you view creating something valuable as successful, then perhaps they are one and the same. I think you see a lot of talented people not feeling that they have succeeded according to some bullshit societal notion of success.

CN: What’s one thing you would say to other aspiring musicians, especially those outside of the U.S., that have similar dreams but are feeling discouraged from accomplishing their goals?

SG: Just go for it. Create something and worry about the logistics later.

CN: What’s one thing you’re most excited for fans to see and hear on tour and with the new album?

SG: A pocket piano ‘break it down’ for the ages.

[easy-social-share buttons="facebook,twitter,google,linkedin,stumbleupon,pinterest" counters=0 hide_names="force" fixedwidth="yes" fixedwidth_px="111"]
Previous ArticleG8 summit not to be held in Chicago after allNext ArticleWillem Dafoe talks about his role in John Carter