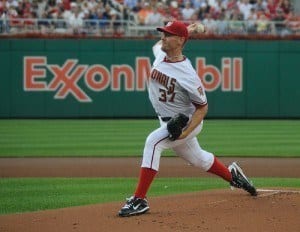 Nats ace Stephen Strasburg is looking at shorter outings as the MLB season draws down on final 40 games.

Stephen Strasburg, the Washington Nationals’ right handed pitching phenomenon, shut down the Atlanta Braves Tuesday night at Nationals Park in D.C., striking out 10 batters and giving up only one run in six innings pitched. But despite the usual stellar performance from the 24-year old hurler, Strasburg faces some bench time in his foreseeable future.

Nationals General Manager Mike Rizzo looks to play it safe with Strasburg by benching him shortly into games as a way to preserve the young pitcher’s arm. Strasburg has been a subject of workload caution after he underwent Tommy John surgery in 2010.

Chosen as the number one overall pick in the 2009 MLB Draft, Strasburg signed a record-breaking four-year, $15.1 million contract with the Nats. And for the Nats, it has certainly paid off.

Since his rookie season in 2010, Strasburg has yet to exceed an ERA of 3.00, and has maintained a win-loss percentage of .700 over the course of three seasons. Though Strasburg only pitched 92 total innings from 2010-2011—compared to the 145 he has logged this season—the stats speak for themselves in just how valuable Strasburg is to the Nats.

In three years, Strasburg nears 300 strikeouts (299). That would put the young pitcher at about 100 Ks per season, though most of the 2011 season was spent rehabbing his right elbow.

In one of those bizarre moments when what doesn’t kill you makes you stronger, Strasburg returned from his Tommy John surgery with unparalleled gusto. The kid is a force to be reckoned with. The 6’4’’ right hander has demonstrated his prowess on the mound this season, striking out 183 batters and holding down a record of 15-5, his best season thus far.

So it is no shock to see debate arise surrounding the future of Strasburg’s starting career this season. To many, the sheer thought of cooling down an asset like Strasburg seems ludicrous. Especially when the Nats are looking at one of the best seasons the club has ever had.

The Nats are 77-46 going into the last forty games of the season. They are holding down the top spot in the National League East with a seven game lead over the Atlanta Braves, who Strasburg and the Nats dealt a beating to last night in the nation’s capital.

Together as a ball club, the Nats are batting .258, but it is Nats pitching that is particularly worthy of praise.

Strasburg rounds out a young five-man pitching rotation that boasts a 3.23 ERA, that as a team, contains a W-L% of .626.

4 out of 5 of the Nats starting pitchers are well over the 100-mark in strikeouts, as well as being over .500 in win-loss record.

With a pitching staff that has demonstrated its ability to hold its own this season, perhaps the idea of a more rested Strasburg is not as bad as people think. When you are seven games ahead of a dwindling Atlanta Braves team, holstering Strasburg for future production may be the best bet for the Nats to make a push in the post season.