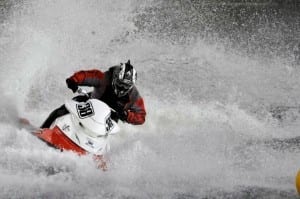 According to a media report, Kyle Glover, the 11-year-old stepson of singer and entertainer Usher is reported brain dead after a terrible tragedy this past weekend.

The stepson of Usher was out boating for a day out on Georgia’s Lake Lanier with his friends when the accident occurred on Friday. Around 3:00 pm, Glover and a 15-year-old friend were in an inner tube being pulled by the boat when they both were suddenly struck by a jet ski.

Both children were immediately airlifted to Egleston Hospital in Atlanta. Glover’s friend suffered from some injuries; however, Usher and his family have experienced a tragedy as Glover has been declared brain dead.

Despite Usher and ex-wife Tameka Foster’s ongoing bitter divorce battle, Usher had a private jet bring Foster to her now brain dead son in the hospital.

According to two Department of Natural Resources rangers that witnessed the accident, the jet ski driver was out with a large group of family and friends that had rented two jet skis and a pontoon boat for the day.

Sgt. Mike Burgamy with the Department of Natural Resources stated, “It looks like they were trying to have a day on the lake and have a good time, but obviously something went wrong and two kids got run over.”

Although officials have ruled out alcohol as a factor in the incident, the cause of the horrific accident that left Glover brain dead is still under investigation. While it could take months to determine the cause of the accident, Robin Hill, a representative for the Department of Natural Resources states that they will recreate the accident using special computer programs to determine the details.

Usher and his family have still not pressed charges over the accident; however, based on the results, he could still choose to do so. As of today, Usher and Foster have not made a decision about taking their now brain dead son off life support.