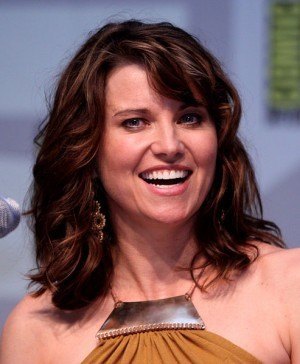 Lucy Lawless, star of “Xena: Warrior Princess” and the Starz series “Spartacus”, was arrested in her native country of New Zealand on Monday after protesting aboard an Arctic oil-drilling ship.

Lucy Lawless and six other Greenpeace activists boarded the ship early Friday and climbed to the top of a 174-foot drilling tower. The ship, chartered by oil company Shell, was supposed to depart Port Taranaki over the weekend.

Lucy Lawless and the other protesters have all been charged with burglary. They boarded the ship to raise awareness about Arctic oil drilling.

“I’ve got three kids,” Lucy Lawless said, “My sole biological reason for being on this planet is to ensure that they can flourish, and they can’t do that in a filthy, degraded environment. We need to stand up while we still can.”

While Lucy Lawless and her cohorts have been charged with burglary, a spokeswoman for Greenpeace insisted that no property was taken or damaged during the occupation.

“We will continue to stand in solidarity with the communities and species that depend on the Arctic for their very lives until Shell cancels its plans to drill in this magical world, and makes the switch to clean, sustainable energy,” Lucy Lawless said.

In an ironic twist, Lucy Lawless played a gas station attendant in a Shell commercial in the early 1990s.

Greenpeace stated in a press release that after Lucy Lawless and the other activists camped out on the ship, more than 135,000 people sent emails to Shell executives telling them to cancel their plans to drill in the Arctic.

Shell New Zealand Chairman Rob Jager said in a press release that the protest had endangered lives and he was glad it was over. According to the release, Lucy Lawless and the Greenpeace protestors did not accept the company’s offer for a “productive conversation” about the protests.

“This chapter has ended, but the story of the battle to save the Arctic has just begun,” Lucy Lawless said in a statement. “Seven of us climbed up that drillship to stop Arctic drilling, but 133,000 of us came down.”