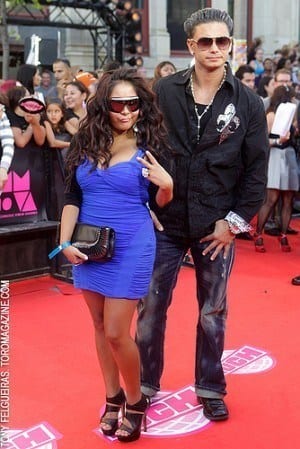 Nicole “Snooki” Polizzi and Jionni LaValle welcomed their first child Sunday morning. The cast of “Jersey Shore” have showed their love via Twitter.

Snooki’s baby has finally been delivered, and it’s as if the “Jersey Shore” cast have welcomed a new member to their crew, Aug. 26.

Nicole “Snooki” Polizzi and her fiancé Jionni LaValle were up late into the night waiting for their first child. Snooki’s baby, Lorenzo Dominic LaValle, was delivered at 3 a.m. at Saint Barnabas Medical Center in Livingston, New Jersey, according to MTV.com.

After much debate over Snooki’s ability to care for a child at her age and maturity level, Snooki’s baby was welcomed into the world lovingly by friends and family. “Jersey Shore” star Pauly D is one of the many gushing over the baby’s arrival. “So happy for Snooks and Jionni and the newest addition to our shore family, Baby Lorenzo. Uncle Pauly is ready to teach that li’l dude how to deejay. I think I may need to remix him his own lullaby,” Pauly D told the NY Daily News.

Even as an ex-fling, Vinny Guadagnino is happy that Snooki’s baby has arrived healthy and that the engaged are happy. “I’m finally an uncle!!! Congrats @snooki and @JLaValle! Can’t wait to meet #babylorenzo!,” tweeted Vinny.

Aside from getting his own hashtag within a day of being born, Snooki’s baby may also appear on the silver screen, according to Zap2It.com. It has been reported that the birth of baby “Enzo” was in fact filmed, and will most likely appear on television for the “Jersey Shore” spin off “Snooki and JWoww.”

Until then, Snooki’s baby will have appearances in magazines and tweets, especially on Snooki’s twitter. In response to JWoww’s tweet congratulating the new mom, “Hardly any sleep but SO worth it!,” Snooki says of parenting so far.