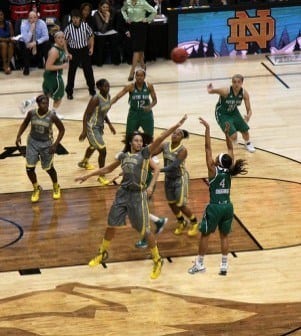 Diggins scored 24 points in the game, bringing the final score to 87-76. After the game, Diggins won the regional’s Most Outstanding Player award.

The win was the 30th consecutive game for Notre Dame, which is a school record. This will be the team’s third consecutive year in the Final Four.

In addition to Diggins’ 24 points, she finished with nine assists, five steals and five rebounds.

Some team members are used to nothing less than being a part of the Final Four, but Diggins was on the team as a freshman when the team lost in the Sweet 16 to Oklahoma.

According to ESPN, Diggins’ determination is the reason Duke’s season is now over.

New to the team, Jewell Loyd credits Diggins with being very accessible.

“I’m not afraid of her – most people think she’s such an icon, you can’t really talk to her,” she said. “No, she’s not. She’s a sister. She’s kind. She helps me all the time. That’s something you can’t just create. It’s there from the get-go.”

Duke led Tuesday’s game in the first half, and McGraw let the team know how badly they were playing, by the high standards that were set for them. Obviously, the team turned the game around.

“I really believe that if we play like we know we can play, if we string together 40 good minutes, we’ll have the opportunity to get a national championship again,” Diggins said.