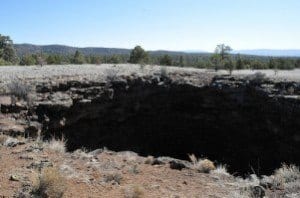 A sinkhole in Florida opened up last night underneath a man’s bedroom, taking him into the earth as it widened.

Rescue efforts were suspended today after officials determined the house was unstable and the sinkhole would continue to grow. Jeffrey Bush, 36, remains missing.

Bush’s five family members survived the sinkhole and escaped the house safely, but said they fear the missing man may be dead.

Bush’s brother Jeremy jumped into the sinkhole, attempting to save his brother. Rescue workers pulled him out, believing the hole would continue to widen.

“I feel in my heart he didn’t make it,” Jeremy Bush told Tampa TV station WFTS. “There were six of us in the house. Five got out.”

Hillsborough County Fire Chief Ron Rogers said, “The sooner we can locate the victim and determine his status, the better. We have to make sure we don’t endanger other personnel or other people in the process. It doesn’t help to compound the situation.”

The Florida sinkhole is estimated to be about 30 feet wide and 20 feet deep. The safety zone around it was extended to 100 feet in radius.

The family’s house was not affected externally, but Bush’s entire bedroom was reported to have been completely destroyed.

Sinkholes are common in Florida because of the amount of limestone in the ground.

“There’s a lot of groundwater that goes through the limestone and can erode the limestone away,” Hillsborough County spokesman Willie Puz said. “As the water table rises and falls, sometimes those voids in the limestone can’t support the weight that is on top of them, and they cave in.”

Previous ArticleLongboarding 101: A Quick and Easy Guide to Getting Around Campus in StyleNext ArticleAndrew Mason, former CEO of Groupon, fired by board