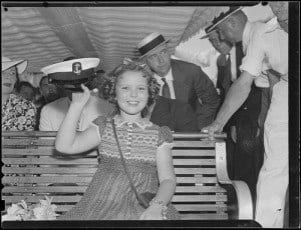 Shirley Temple, Hollywood legend and U.S. diplomat, has passed away at the age of 85. Shirley Temple’s family released a statement early Tuesday morning stating, “We salute her for a life of remarkable achievements as an actor, as a diplomat, and as our beloved mother, grandmother and great-grandmother.”

Shirley Temple became a sensational child star in the 1930’s. Famous for her strawberry blonde curls and her triple threat abilities, her films quickly became box office successes. Best known for singing “On the Good Ship Lollipop” in the movie Bright Eyes, as well as for her roles in Curly Top and Rebecca of Sunnybrook Farm, Shirley Temple has charmed audiences for over 80 years. Famed director Allan Dwan once said of Shirley Temple, “She was just absolutely marvelous, greatest in the world. With Shirley, you’d just tell her once and she’d remember the rest of her life.”

As she grew older, Shirley Temple left Hollywood, only to attempt a semi-successful comeback. Realizing that her time as a star was up, Temple officially retired from the movie business and focused on raising a family. Temple was married to second husband Charles Alden Black for 55 years and raised three children. Later in life, Shirley Temple had a political career where she served as the first female Chief of Protocol of the United States, as well as an ambassador to Ghana and Czechoslovakia.

Shirley Temple passed away from natural causes and was surrounded by her loved ones when she passed.