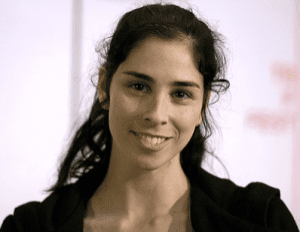 Sarah Silverman is known for cracking edgy jokes about touchy subjects, including the Holocaust and rape. Now, she’s entered the controversial world of abortion.

Last week Sarah Silverman posted two photos on Twitter. The first was making fun of sappy pregnancy photos and featured her with a round belly and the caption, “It’s a burrito!”

About five minutes later she posted a second photo that showed Sarah’s flat stomach. “Got a quickie aborsh in case R v W gets overturned,” she wrote.

Many people were outraged. “@SarahKSilverman your latest joke was tastless and insensitive. Abortion is not something you should be laughing about #shameonyou #sad” tweeted Twitter user RoxJajo.

FOX News Nation labeled it a “sick Sarah Silverman Abortion Hoax” and said that she “joined America’s current War on Women” by posting the pictures. Conservative news aggregation site The Drudge Report ran the headline “Sarah Silverman tweets ‘before-and-after abortion’ photos,” failing to mention that there was, in fact, no abortion, and that it was a joke.

Meredith Carroll, at the babble, said that people are missing the point entirely, which is to poke fun of the perception on the right that the “pro-choice movement is all about – killing life at every opportunity.”