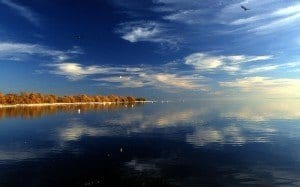 The southern California lake may dry up faster than expected

The Salton Sea is shrinking rapidly, and a recent California Supreme Court ruling could intensify its decline.

Last month, the California Supreme Court upheld a water transfer deal that sends billions of gallons of water each year from Imperial Valley farmland in southern California to residents of San Diego County. It will cut off the agricultural runoff that replenishes the Salton Sea and could cause the lake to dry up entirely in a matter of years.

The Salton Sea was first created by a flood in 1905. It isn’t really a sea but a lake that covers more than 500 square miles.

The drying of the Salton Sea could release harmful elements like selenium and arsenic from the lakebed, which could spread toxic dust clouds across southern California.

According to the California Audubon Society, these clouds are already forming.

“As water has been siphoned off for agricultural and urban use, dust emissions have increasingly threatened public health,” the California Audubon Society states on their website.

According to NPR, the Salton Sea currently covers 376 square miles of toxic seabed.  Over the last 100 years, the sand has absorbed all the pollutants form the agricultural run-off of nearby farms.

The Salton Sea used to be a popular tourist destination. It was hailed as a “miracle in the desert” and was once a vacation spot that rivaled Yosemite in annual visits. Although people have stopped going to the Salton Sea for vacations, it is still a popular destination for bird-watchers and, of course, a stop for the birds they watch.

In fact, more than 400 different species stop at the Salton Sea each year. If the Salton Sea dries up, those flocks will lose one of the few waterways in southern California on their migration route and face extinction.

The water transfer deal, known as the Quantification Settlement Agreement, includes provisions to provide the Salton Sea with “mitigation water” through 2018, but experts say that is not enough. Politics are playing into the deal, and Californians are voicing their opinions, but the imminent demise of the “miracle in the desert” is just a matter of time.