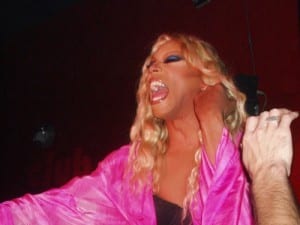 Sahara Davenport, real name Antione Ashley, who was best known for his appearance on season two of RuPaul’s Drag Race in 2010, has passed away at age 27. Logo, the network behind the drag queen reality show, confirmed the death of one of its former contestants on the network’s Facebook page, though the real circumstances surrounding Sahara Davenport’s passing remain unclear.

A Dallas, Texas native, Davenport earned his Bachelor’s of Fine Arts in dance at Southern Methodist University. It was his time at SMU that Davenport honed his skills as a drag performer. Davenport then decided to move to New York City, as do most young hopefuls with dreams of succeeding in the performing arts. There, Davenport performed in gay bars and nightclubs before landing roles in A&E’s 15 Films About Madonna, Voom HD’s Magnificent Obsessions and One Life to Live.

Davenport, though eliminated in the sixth episode of RuPaul’s Drag Race, released the singles Pump With Me and Go Off.

Alarmed by the news of a former contestants’ unexpected death, RuPaul tweeted, “Shocked and heartbroken over @SaharaDavenport. Never occurred to me that we’d ever lose one of our girls. I see them as immortal.”

Sahara Davenport is survived by his boyfriend Karl Westerberg, who also competed on RuPaul’s reality show under the stage name Manila Luzon.