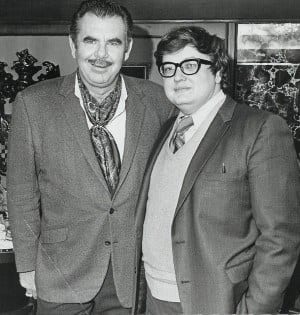 Beginning in 2002, Roger Ebert suffered life-threatening cancer, which resulted in a series of invasive surgeries that left him severely debilitated, according to ABC News.  In 2006, complications from thyroid cancer required the removal of his jaw, stripping of his capacity for speech, eating and drinking without assistance.

“I looked like the thing that jumps out of that guy’s intestines in ‘Alien,” Ebert wrote in his 2011 memoir, “Life Itself.”

Even still, Roger Ebert soldiered on, still writing regularly for the Chicago-Sun Times and hosting the 15th annual Roger Ebert’s Film Festival later this month in his hometown of Champaign-Urbana.

On April 3, the film critic who reached the wealth and fame more familiar to the stars of the movies he covered announced that he was taking a “leave of absence” after the return of his cancer caused a “painful fracture” that made it difficult for Ebert to walk.

Roger Ebert was born in downstate Urbana on June 18, 1942, and was the only child of Walter Ebert, an electrician, and Annabel Ebert, a bookkeeper. Ebert began modestly, like many writers, freelancing and selling his work to the local Chicago Daily News and Chicago-Sun Times while pursuing a PhD in English at the University of Chicago.  In 1966, he was hired as a writer for the Sun-Times’ Midwest magazine.  Six months later he would become a film critic.

In 1975, he was awarded the Pulitzer-Prize for criticism, the first time the awarded was given for film criticism.  The show, Siskel & Ebert at the Movies, would make the most famous film critic in the world.  Roger Ebert was 70 years old.

After a series of surgeries in his decade-long battle with cancer, Roger Ebert said about death, “I know it is coming, and I do not fear it, because I believe there is nothing on the other side of death to fear.”