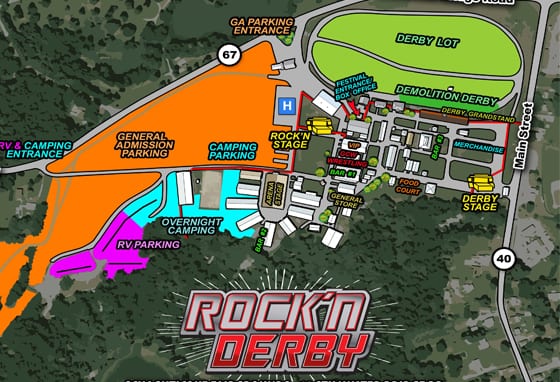 The founder of Bamboozle John D’Esposito has started a new project — Rock’n Derby.  This three-day event kicks off in upstate New York and features bands like Clutch, Corrosion of Conformity, Lamb of God and many more, all while hosting a demolition derby. On May 20 – 22 the Scaghticoke Fairgrounds turns it up for the Rock’n Derby, a ground breaking festival that is the first of its kind.

The demolition derby and rock fest has caught the attention of a compelling group of fans. Both hard rock fans and demolition derby fans make this concept a one of a kind concert experience. John D recently spoke with College News about the dynamics involved in creating an event like the Rock’n Derby and why this new concept is suited for a wide audience.

“Fans along the east coast have been waiting for a unique concert experience like this, which evolved from the success of The Bamboozle in New Jersey.”

Now hard rock meets demolition and derby competitors are lining up from all around the country to compete in the Rock N’ Derby. This exclusive experience has drawn racers for a chance to win cash, prize packages and media exposure in the demolition derby world. It is the most talked about event of the season, featuring shows that have never been seen before.

John D spoke about the immense team work involved in preparing not only an excellent lineup but event services that correspond with the demolition derby.

“We subcontracted an expert to handle the demolition derby. There will be a show each night and the bands will be playing during the derby so the festival will be operating while the derby is going on.”

John D is known for putting on a good show and the Rock’n Derby is just another example of the incredible events that allow people to experience something new and original. So prepare for a vacation experience with the hard rock gods, an action-packed demolition derby, camping among the stars, and the Rock’n Derby at the Scaghticoke Fairgrounds this weekend.

You should also read: “Most Likely to Die” in theaters Friday the 13th