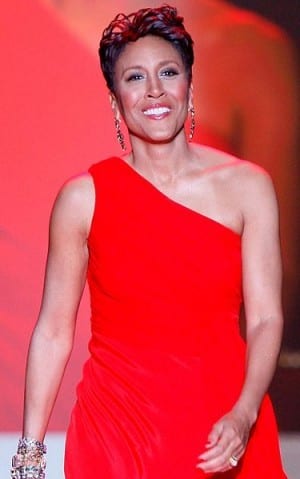 Robin Roberts said goodbye to GMA but pledges to return

Robin Roberts said her goodbyes on Thursday to her audience and co-workers of Good Morning America. Thankfully, her leave is only temporary.

She was originally scheduled to depart from the show on Friday, but changed her plans last minute to go visit her ailing mother in Mississippi.

At the end of Robert’s emotional send-off, she said “See you later. See you soon. I’ll get back as soon as I can.”

The anchors due to sub for Robin Roberts include fellow ABC News colleagues Katie Couric, Diane Sawyer, Barbara Walters and Elizabeth Vargas. Additional stand-ins for the position also include Chris Rock, Oprah Winfrey, Rob Lowe and even the cast of the ABC comedy Modern Family.

Roberts is taking the medical leave due to her MDS—a blood and bone marrow disease. She is scheduled to undergo a bone marrow transplant with the donor being her older sister, Sally-Ann Roberts.

Lifestyle anchor Lara Spencer gifted Roberts with monogrammed matching pajamas for her and her sister. She told Roberts, “We’re not crying tears of sadness, we’re crying because we wish we could take this on for you.”

The procedure demands the most recovery happening within the first 30 days. The recovery process varies. Roberts is unsure when she will be returning to GMA.

The entire GMA family is behind Roberts 100 percent. They gathered around the anchors’ couch wearing bracelets of support and holding signs that promoted the “teamrobin” Twitter trend.

Roberts, being the strong woman that she is, left her followers with an inspirational quote: “Life provides losses and heartbreak for all of us. But the greatest tragedy is to have the experience, and miss the meaning.”