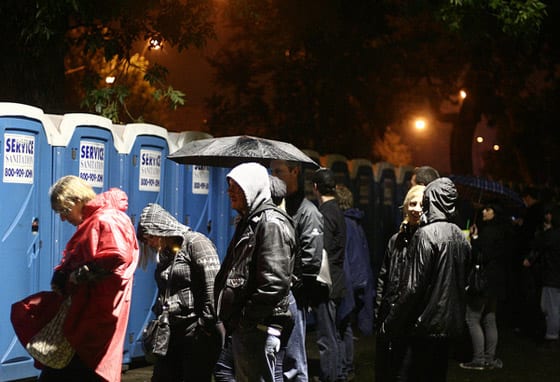 Riot Fest 2015 in Chicago experienced a lot of audio issues, but was otherwise a success

If the Chicago music festival scene were viewed as high school cliques, Riot Fest would definitely be the cigarette puffing, colored hair and tattered jeans rebels that just didn’t really give a shit about anything. Compared to the popular-kid fest, Lollapalooza, and the rich artsy scene-fest, Pitchfork, Riot Fest has always had a special place in my heart because it is one of the only places where people don’t ask me why I’m covered in head to toe black clothing. Riot Fest went through a big change this year with the location moving from Humboldt Park to the Douglas Park, which I was curious to see how the two would compare since Douglas Park caused some controversy because of the high crime level in the neighborhood.

Riot Fest always pulls in the best headliners, but for the past 3 years the true standout headliner has been Mud. No, not Mud, the English glam-rock band, but the literal mixture of rain, dirt and moshpits that tried it’s best to capture the onslaught of Doc Marten’s that wreaked havoc through the weekend.

Day 1 of Riot Fest marked the day of rain and the beginning of audio issues- an issue that would plague the rest of the weekends and taint otherwise awesome sets. Legendary Living Color attempted to kick off their set, only to be met with no sound and disappointed fans yelling for tech to fix the sound issue.  Against Me, was also a highlight of Friday with frontwoman, Laura Jane Grace, giving a strong message to the transgender community when she wore a short with “Gender Is Over” emblazoned on the front.

Day 1 was definitely the hardest headlining choice to make with No Doubt, Ice Cube and Motorhead, all starting their sets at the same time.  As much as I wanted to see No Doubt and see if Gwen Stefani would share some of her vampire blood (seriously, how does she stay young forever?), I was fresh off of seeing, Straight Outta Compton, and I was on a N.W.A high and went over to catch the buzzed about set. Ice Cube was joined on stage by DJ Yella and MC Ren who went through the tracklist of Straight Outta Compton, for a performance that didn’t do the album in it’s entirety, but gave fans what they wanted. During these sets the awkward set up of the staging definitely came into play with sound bleeds wafting between No Doubt and Ice Cube’s sets.

Audio failure really reared it’s ugly head on Day 2, when multiple sets were riddled with the sound going in and out or bleed issues from adjacent stages. The most disappointing audio failure, was definitely Billy Idol’s. The British sex symbol still made leather-clad hearts swoon in the audience, however we couldn’t hear him since the sound cut out completely multiple times. Leading people to awkwardly stand and look confused or head over to different sets.  Definitely the best set of Saturday belonged to Iggy Pop who powered through all of his major hits, while strutting and gyrating with the oomph of someone half of his age. The sound was the best I heard all weekend and the crowd was highly energetic and diverse. Everyone from their late 50’s to early 20’s were rocking out.

Day 3 was definitely like a makeshift 420 holiday with the performers of the day largely being made up of stoner legends.  Stephen Marley and Skip Marley got on stage to kick off the day of incessant weed smoking, The relaxed reggae was a chill precursor to the next stoner legends, Cypress Hill who didn’t waste any time going into their fun cannabis anthems, but the people were truly waiting or the King Snoop. And oh, were people waiting. Snoop D-O-double G showed up a half hour late to his set, blunt in mouth and went through his classic album Doggystyle, while peppering in some of his newer hits to give the people what they want. Riot Fest wasn’t pleased with Snoop’s tardiness either because they cut his set short to make room for Modest Mouse who was slated to perform at the next stage over.

All in all Riot Fest’s inaugural year at Douglas Park had many kinks, but was surprisingly successful for a first-time test run. Next year I am sure all of the problems from last year will improve and we will meet again for yet another epic weekend of punk nostalgia.

You will also like: #Lolla2015: We give out some awards to the best moments of the weekend