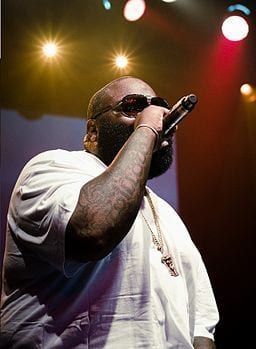 Rick Ross survived an apparent drive-by shooting attempt while celebrating his 37th birthday in Fort Lauderdale, Florida. As Rick Ross was leaving the restaurant The Floridian Diner and getting into his Rolls Royce, shots were fired from an as-of-yet unidentified gunman. Witnesses went on record hearing at least 10 rapid-fire shots in the drive-by shooting. “I was sound asleep and I heard boom-boom-boom and I ran out and said, ‘Did you hear that?'” Carol Touchstone, a nearby business owner, reported to the Miami Herald.

While Ross survived the shooting – every single bullet miraculously missed him – he did crash his Rolls Royce into an apartment building while evading the shooting attempt. Rick Ross’ passenger – a 28 year old fashion designer named Shateria L Moragne-el – was also unharmed by the shooting attempt, and though either have yet to comment publically on the incident, they have spoken with the proper authorities. The unidentified gunman in question fled the scene before police showed up.

While a scary incident for sure, one that reinforces America’s dangerous relationship with private weapons and hip-hop’s ongoing image struggle with gang violence, it is a relief that the story ends without death. Rick Ross could have easily become the next Tupac or Biggie, but thankfully it looks like we won’t be needing 100 black coffins for the famous rapper. Ross’s most recent full-length album, “God Forgives, I Don’t”, is Grammy-nominated for Best Rap Album of 2013, and the rapper will live to see whether or not he claims the top prize. The album topped the US charts last summer and reached No 8 in the UK.