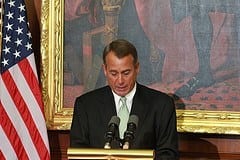 Boehner’s comment to President made First Lady roll her eyes

Michelle Obama stole the spotlight from her husband during an inaugural lunch on Monday, after rolling her eyes twice in response to a comment from John Boehner.

Michelle Obama’s eye roll was first noticed by Tumblr blogger “Mattyrab”, who captured video of Michelle’s encounter with John Boehner. The video went viral shortly after, and has now been viewed by millions of people.

The video shows that Michelle Obama was seated in between her husband, President Barack Obama, and current Speaker of the House John Boehner. It appears that the two men were having a conversation when John Boehner reached over to tell the President something. Michelle Obama clearly overheard the comment, and her response was not just one roll of the eyes, but two.

There is no audio available of the encounter, so it’s impossible to determine what John Boehner said that would prompt Michelle Obama’s response. But the blogosphere is abuzz with speculation: a joke? a snide remark? an insult?

John Boehner, a Republican Congressman from Ohio, would later partake in another interesting interaction with the President; he shook hands with Obama, but the action looked less than sincere on video as neither men made eye contact with each other. Boehner’s handshake with Vice President Joe Biden, on the other hand, seemed warm and genuine.

All this happened during a lunch celebrating the President’s inauguration at the Capitol Building on Monday. Neither the White House, Michelle Obama, nor John Boehner’s spokespeople have addressed the eye-roll or the comment that elicited it.

Watch the video of the infamous eye-roll here: http://www.youtube.com/watch?feature=player_embedded&v=-l13AlHzLhs