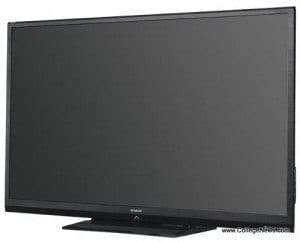 Is it possible for an HD TV to look too good? And why are we using literary and robotic terms to review a television? Read on to find out!

The Uncanny Valley. It’s a term used in the field of robotics to explain that uncomfortable feeling people experience when seeing a lifelike robotic version of another human being. The Uncanny Valley was most recently experienced in the mainstream with the release of Rockstar’s “L.A. Noire” video game, a title that boasted such realistic human faces and nuanced emotions, some people found it difficult to become immersed in the actual game; it made the suspension of disbelief tough to achieve.

So what on earth do these robotic and literary terms have to do with a television review? Quite a bit, as it turns out.

This AQUOS Smart TV from Sharp has enough connections to accommodate audiophiles, hardcore gamers, and everyone in between. It goes without saying that with 4 HDMI connections, it rocks as a computer monitor. (Hook your gaming desktop up to it and play “Diablo III” for 60 inches of awesome.) We were also pleasantly surprised at the television’s light weight (under 70 pounds) meaning any modest entertainment center can support it.

Smart, But Not Brilliant

Getting set up out of the box is a snap, as the menus guide you through basics like adjusting your time zone and adding your wireless network. Once your internet access is established, you have access to Smart Central’s array of apps like Vudu, YouTube, CinemaNow, and Netflix.

Conspicuously missing from that lineup are two apps we consider vital to our television and movie consumption: Amazon Instant Video and Hulu Plus. While Amazon’s app is only available on a few devices (like the PlayStation 3), the absence of Hulu is regrettable. Sure, you can watch it via your Xbox or PS3, but the aim of a Smart TV is to provide a comprehensive suite of services that make watching television convenient. Hulu, Netflix, and Amazon Instant (especially for Prime members) are the cornerstones of our television fix. We need all of them!

Anyone in the market for a 60” TV likely has or is planning to purchase a surround sound system or Sharp Soundbar to accompany it. The good news here is that if you’re budget-strapped, the AQUOS speakers deliver some powerful, rich sound without distorting. The level of bass was especially impressive — by no means will it replace a Soundbar or subwoofer, but you won’t have any complaints in the audio department. (TechTip: For those of you with an Xbox 360 Kinect, you may want to place the Kinect under the TV and not above it — the rear speaker placement of the TV could bounce audio off the walls and interfere with your voice commands. It’s a minor concern, but one to be aware of.)

The AQUOS menu screens have big icons to steer you in the right direction, with help text explaining each option if you hover over it long enough — something you’ll appreciate for the more advanced picture preferences. Other modern TVs like Sony’s Bravia line have more intuitive interfaces. The menus themselves don’t feel as snappy as they should be, either, with noticeable lag when clicking between each category. Again, a minor complaint that wouldn’t dissuade us from a purchase, but something anyone preparing to drop a significant amount of money should be aware of.

What follows in this review is strictly a matter of preference and your mileage will certainly vary. We want to emphasize that the following is a wholly subjective opinion. For some, this AQUOS display will simply dazzle you in all the right ways; for others, it will plain creep you out.

Our first true test of the 60” HDMI LCD display was “The Lord of the Rings” on Blu-Ray, played via our PlayStation 3. It went beyond looking lifelike; rather, it gives your brain the impression that the cast was actually acting out the movie in your living room. In part, this can be toned down by turning off the “Motion Enhancement” options, which artificially inserts frames in an attempt to smooth fast-paced sequences or even low-quality YouTube streams. But even with motion enhancement deactivated, viewing the film with default settings looked too good.  (For more about this issue, research Peter Jackson’s decision to film “The Hobbit” in a 48fps format.)

The sad reality, in our experience anyway, is that it removes the suspension of disbelief as your brain struggles to remember that you’re not watching something in the real world — especially with such lifelike depictions of scenery and people. It took us out of the action and detracted from the overall experience.

The flip side to this? This is THE TV for sports fans with HD subscriptions. Animation buffs will also have a field day. Pop in Wall-E on Blu-Ray and your eyes will thank you for a lifetime. Gamers, too, will appreciate the screen real estate and may finally be willing to share it for some “Gears of War” or “Borderlands” couch co-op.

In an odd way, we were relieved to ship the AQUOS back to Sharp and downgrade back to our 4 year old Westinghouse 37” TV. We’ll miss the Sharp’s slender frame and its gorgeous 60” screen; we’ll miss the instant-on web apps and the surprisingly awesome sound. We’ll especially miss how lifelike an HD basketball playoff game looks.

But sometimes your brain needs an escape from reality — it needs to be safe in the assumption that The Lord of the Rings isn’t a story that takes place in New Zealand, but rather in Middle Earth.

Review statement: A loaner unit of this TV was provided by Sharp for the purpose of this review. This TV retails for $1,499, but you can usually find it much cheaper on places like Amazon.com