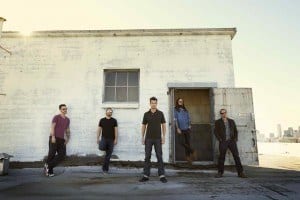 Nebraska band 311 has been making music for over 25 years, mixing a blend of rock, rap and reggae. 311 broke into the mainstream in the mid 1990’s with their own innovative combination of metal guitars, vocal harmonies and funky rapping. The band is back with their 11th studio release “Stereolithic,” due out on (you guessed it) 3/11.

College News has been given inside access to preview “Stereolithic” before its full release in the next coming weeks. The new album will be well received by fans old and new alike. The band sticks to their predominantly rock sound but also ventures into newer territory with songs like “Tranquility” and “Friday Afternoon.” These tracks show the band’s more laid back, mellow side.

First time listeners will immediately notice the mix of many different musical influences and styles. Each song changes pace and rhythm, sometimes mid-song. Fans will immediately take to songs like “Sand Dollars”, “Make it Rough”, and “First Dimension.” Relying mostly on thrash guitar riffs and a combo of singing and rapping, these songs stand out amongst others.

Lead singer and guitarist Nick Hexum states “I don’t think we really have anything to prove. We had the experience in the 90’s of making our own musical revolution, combining rock, rap, and reggae and kind of starting a whole genre of music. Being such an underground phenomenon, there was so much excitement at our early shows, that eventually it came a time that people were vibrating when we came on stage.”

The band relies on s simple method of working together from scratch, even bringing back their old producer, Scotch Ralston. The band started with just demos and ideas from each member, slowly bringing together a number of songs that sounded like an album. Asked how his band has stayed together for so long and made such consistently good music, Hexum contends, “You have to be ready not to get your way, and you have to listen and be flexible. That’s one good thing about having an odd number of band members: At the very worst it’s going to come down to a 3-to-2 vote, where two people will just have to suck it up and accept it.”

The band experiments with new recording techniques, sampling and overdubbing. This really makes the songs jump off of the album. The guitars are tighter, the vocals are cleaner and the tracks flow together, even in their uniqueness. Hard rock fans will be pleased with the innovative guitar harmonies, while reggae fans will enjoy the delivery and content of the lyrics. Overall, the sound on ‘Stereolithic” is bombastic enough for radio and arenas, while still remaining chill and tasteful enough for casual listeners.

Be on the lookout for 311’s new 15-song release and its upcoming concert tour.