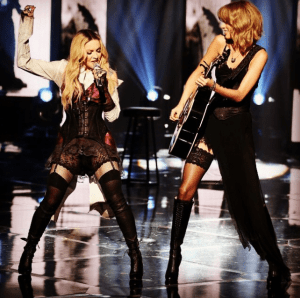 Sunday night’s iHeartRadio Music Awards featured some snazzy and stylish appearances before attendees settled into the Shrine Auditorium in Los Angeles for another night of stellar performances and awards.

Meghan Trainor was one of the first to hit the red carpet before the event sporting a short black dress while actress Brittany Snow looked lovely in a white cut-out dress with hair pulled back into a fishtail braid.

Taylor Swift also looked amazing in a stand-out black dress before sweeping the award show with wins for Artist of the Year, Song of the Year for her hit single “Shake It Off,” as well as Best Lyrics for her latest single, “Black Space.” Swift thanked fans for her wins saying, “More than anything in the world, I just hope that any of the fans watching know how much I adore you … we’ve gotten closer and closer with each year, not further apart.”Later in the night Swift also assisted Madonna on stage strumming guitar while the iconic songstress debuted a new song.

Other attendees of the second annual iHeartRadio Music Awards featured Rihanna who delivered a buzzworthy performance of her new song, “Bitch Better Have My Money” while Iggy Azalea and Jennifer Hudson collaborated for a performance of their song, “Trouble.”

After hosting the Kids Choice Awards Saturday night, Nick Jonas performed at the iHeartRadio Music Awards in chains suitable for his performance of his latest song, “Chains.”

Other winners included Ariana Grande, Nicki Minaj and Jessie J who won Best Collaboration for their collaborative effort, “Bang Bang” while newly wed Jason Aldean took home an award for Country Song of the Year for “Burnin’ It Down.”