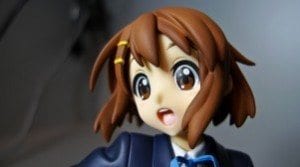 The real-life anime girl, also known by her new Japanese name as Fukkacumi, is going to the extreme with her latest look and style. Anastasiya Shpagina of Ukraine apparently spends hours in front of the mirror perfecting her make-up, hair and outfits so as to resemble an anime character, or Japanese cartoon character.

Along the lines of the real-life Barbie doll, the real-life anime girl has taken to severely altering her appearance to resemble an anime character and has a YouTube tutorial video explaining her make-up procedure for the transformation. The 19-year-old has big doe eyes, thick eye make-up, sculpted eyebrows and brightly colored hair. She reportedly weighs about 85 pounds and is looking to get down to a weight that allows her to have the same shape as an anime character.

The 5 foot 2 inches real-life anime girl says that people on the street are generally alarmed when they see her and that Japanese tourists try to talk to her but do not speak Russian. Her Facebook fan page has almost 13,000 likes, and the tutorial video has over a million views. When the real-life anime girl was compared to a Barbie doll, she replied, “I am not like a doll, a doll is like me.”