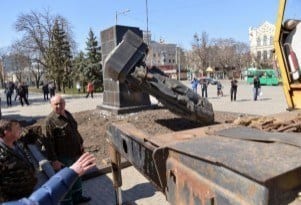 Statues of Lenin and other Communist Symbols Destroyed in Kharkiv

Masked thugs destroyed Soviet-era monuments during the early hours of Saturday. Three statues that honored Bolshevik heroes were smashed apart in the city of Kharkiv, which lies in northeastern Ukraine.

The beleaguered pro-Russian Opposition Bloc, which holds 40 out of 450 seats in parliament, denounced such attacks as undermining Ukraine’s past as well as accused the pro-west regime of encouraging “chaos in the streets.”

The thugs used a ladder to hook the statues with a cable tied to a van which then pulls away and dragged the statues down.

Kharkiv’s Mayor Gennady Kernes demanded authorities to explain why they allow the illegal demolition of monuments, which Kernes described as vandalism.

The video of the vandalisms can be seen here. Police can be seen approaching the scene at 2:10, and stood aside and while the thugs continue.

This incident happened just 48 hours after the pro-west Ukrainian Parliament passed a bill that outlawed Communist and Nazi symbols.

On Thursday, a bill was rushed through parliament that banned the display of Communist or Nazi symbols, although it did allow Soviet veterans to continue wearing their medals.

Ukrainian Petro Poroshenko likened the Russians to the Nazis at the start of World War II.

“What is the difference between the Anschluss (annexation) of Austria or the occupation of Sudetenland (in ex-Czechoslovakia), and the annexation of Crimea or the attempts to tear away Donbass in 2014?” said Poroshenko.

Amid a Russian backed separatist uprising, Ukraine’s government is actively attempting to break all cultural and historical ties to its Soviet and Russian past.

“Feelings towards the symbols of the Soviet Union have become sharply more negative since the beginning of the Russian aggression,” according to Kiev sociologist Andriy Bychenko.

On the practical level, the legislative bill was not specific on how the ban would be enforced.

However looking at the incident just this Saturday, it has already become clear how the ban would be enforced.