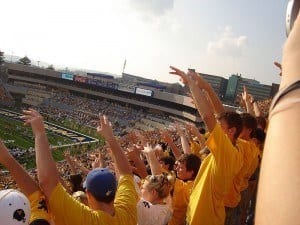 The Princeton Review hits the shelves today with its 2013 edition of The Best 377 Colleges, and the famous top 20 party schools and “stone-cold sober” schools list is back. The company gave around 122,000 students an 80-question survey on academics, administration, campus life, student body and themselves. From there, they named not only the top 20 party schools in the nation, but also the top 20 dry campus schools in the nation.

Drum roll everybody…the Princeton Review’s top party school of 2013 is West Virginia University in Morgantown, West Virginia. WVU’s year is off to a raging start, reported the campus police website, as campus police have already issued dozens of citations for underage drinking and have made multiple arrests outside of campus buildings.  The school also won in the Lots of Beer category and came in third for Students Study the Least category.  Being the champion of the top 20 party list is no easy feat.

In a very dissimilar manner, Brigham Young University in Provo, Utah has been placed at the top of the Princeton Review’s other list, the “stone-cold sober” schools. This is the 15th year in a row for BYU as the reigning champion of the list, while also claiming the gold in the Got Milk? and Scotch and Soda, Hold the Scotch categories.

“If you look at the schools on this list, they are mostly large, public universities with strong academic and research profiles, as well as highly successful athletic programs,” WVU spokeswoman Becky Lofstead told the Associated Press in response to the Princeton Review rankings. “But in the big picture, clearly this list has no real credibility.”