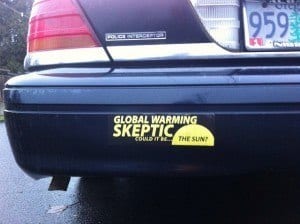 Al Gore and IPCC use fear tactics to swerve the masses

Global warming alarmists, like Al Gore (former VP) and the United Nations Intergovernmental Panel on Climate Change (IPCC), point out the level of CO2 in the air has increased annually since the 1860’s Civil War. The current continued growth in the world economy (China & India) they say will accelerate the rate of increase of the level of CO2 in the atmosphere.

Now for the lie and the imposed guilt that goes with it. After displaying a graph illustrating rising levels of CO2, the champions of limiting anthropogenic (man-made impact on the environment) global warming (AGW) turn to another graph showing the rising global temperatures during the same period of time. The implication is clear: as the levels of CO2 rise, the level of global temperatures will inexorably rise to. However, there is no consistent peer reviewed scientific research that establishes a cause and effect relationship between increased atmospheric CO2 and higher global temperatures.

It is a clever deception, but a lie nonetheless. The AGW hoax lacks any basis in independently verified science. It is built on a grain of truth and a well formed foundation of exaggeration, deliberate deception, and strong arm tactics to promote the AGW view with educators and media.

In many cases it is the well-meaning environmentally focused individuals working to prevent the so called global warming “crisis” that are being duped and taken advantage of.  They were conscripted into the movement by deliberate lies and deception. They work unknowingly to advance the agenda of unseen globalist elite. The organized effort to combat AGW is the tactic chosen by the globalist elite to impose a centralized, worldwide socialist Marxist government. They have frightened citizens and coerced governments, and so far nothing has stood in the way.

The Hidden Agenda is Global Government

Some of the key scientists in the AGW movement falsify historical temperature data to make it conform to their agenda. The global warming alarmist silence climate change critics to avoid public debate over the scientific validity of the AGW theory. This is just not poor science, it is deliberate deception. This systematic fraud can be traced to the international elite that is bent on forcing democracy to support a globalist autocracy. The fight against global warming is what they have decided to use for leverage.

Who are the Supporters?

Those who support the AGW alarmists include national government leaders, politicians, scientists, members of the news media, private organizations, multinational companies, and members of the intellectual elite.  Their agenda is decidedly anti-Western, anti-democracy, and anti-capitalism. The methodology is complex but readily apparent: massive scientific hype and exaggeration, falsification of historical temperature data, and negating well established scientific data (such as Medieval Warm Period & the Little Ice Age). Anything that disproves the AGW theory is discounted, silenced, or falsified.

The Science of Fear

These globalist alarmists use the science of fear to put images in our mind of melting polar icecaps, the fear of dramatic rises in sea levels, increasing global temperatures, the destruction of entire species due to climate change, unless we take drastic action to reduce carbon dioxide emissions. The unspoken agenda is to promote fear and dread among citizens (including schoolchildren) politicians, business leaders, and governments.

Two Reasons to use Fear

The first reason is because fear is an effective motivator, and the news media love scary headlines. Fear sells!
The second reason is because fearful citizens and politicians feel a great urgency to “do something!” Fear of global doom can be used to force sovereign nations to accept enormous social and political changes: like massive reduction in the quality of life and standard of living, while accepting the huge burden of massive taxation, with most of the tax revenues going overseas. All this and more simply to respond to a fabricated and exaggerated environmental threat. It is not too strong a definition to call this “international environmental extortion.” It is not too far away from being “political terrorism” the definition being, “the unlawful use of force or violence against people or property in order to coerce or intimate the civilian population.”

The hidden AGW agenda end game is to weaken and eventually subvert Western free market economies, sovereign nations, and capitalistic democracies. This will enable the socialist Marxist elite to take control of commerce, economics, politics, and national governments. Using the false threat of man-made global warming as the wedge, the globalist elite want to impose their full political agenda. They won’t stop until they have established an unchallenged global government controlled by intellectual, scientific, and political elite.

Where Does the Money Come From?

The clever ruse to raise fear of global doom and gloom is to eventually collect a world tax on every human being alive. This tax will be started to help the so called elimination of deadly CO2 emissions. Money will be siphoned off to help establish the one world global government, just like it was when one billion dollars in disaster aid money disappeared from the fund to rebuild Haiti after the devastating earthquake. While the globalist elite control the money, the pseudo-science, the numbers involved can be made to say anything they want. The AGW elitists want to use our love for the environment to manipulate us and destroy the economic, political, and spiritual values that form the philosophical foundation of the United States of America and Canada! Next time you hear a rant on global warming realize where the message is coming from and who is behind it so we will not be suckered again.