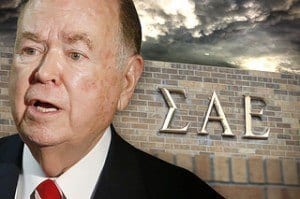 Ties have been cut for the University of Oklahoma Chapter of Sigma Alpha Epsilon, by both their National Organization that ordered them disbanded and by their University that expelled two of their members who were said to be leading the chant. This Chapter of SAE has been the center of news for some days now after a video went viral of them singing a racist chant that included “There will never be a n****r in SAE, and making jokes bout lynching black men while on a bus during a Fraternity event. While much cannot be said of Nationals disbanding the Chapter, the Attorney representing them does not believe that the University has the right to expel the students over the chant. According to Huffington Post, Stephen Jones who is representing the students spoke at a press conference on Friday saying that a lawsuit based on the school’s eviction of the fraternity members is not the “first choice” of the SAE chapter, but is on the table.

Jones has since requested a meeting with the University administrative members for reasons that have not been stated, it is also unclear as to what the Chapter’s executive board wishes to happen between their Chapter and the University. Though Jones is not representing the two students who are facing expulsion for leading the chant, he did imply that it would run contrary to due process saying, “It would be difficult to say a university has a right to censor speech, no matter how distasteful it is.” One of the students caught in the video has since apologized claiming they were taught the chant, while other members from different chapters say they have heard different versions of the same song. Members of the Chapter have been dealing with death threats and getting into physical fights and problems due to the high popularity and knowledge of the case and some fear going to their classes on campus.