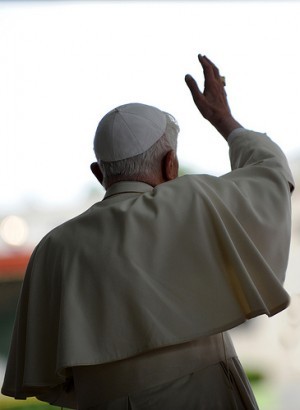 Pope Benedict XVI resignation causes speculation and worry about the future of the Catholic Church.

Pope Benedict XVI announced his forthcoming resignation on February 28th, becoming the first supreme pontiff in nearly 600 years to do so.  The Pope cited his advanced age (85 years) as the reason for his abdication, and released a statement saying, “After having repeatedly examined my conscience before God, I have come to the certainty that my strengths, due to an advanced age, are no longer suited to an adequate exercise of the Petrine ministry.”

Pope Benedict has certainly faced a tumultuous and dramatic papacy since day one, charged with handling the sexual abuse crises and allegations against his Church, and continuous backlash to his conservative doctrine and controversial statements.  The Pope has faced considerable anger from the Muslim community after he compared Islam to violence, as well as upset from the Jewish community over the rehabilitation of a Holocaust denier.  Pope Benedict XVI also stepped up the Catholic Church’s official opposition to gay marriage, female priesthood and embryonic stem cell research.

Pope Benedict will not be involved in the election of the new pope, although analysts fear the consequences of the dual presence of a newly elected reigning Pope and an ex-Pope.  The Pope’s predecessor, Pope John Paul II refused to step down for just such a reason, despite his quickly deteriorating health, fearing a “schism” in the church caused by instability and confusion of two living popes.  This issue will be extremely controversial, especially if the newly elected pope is progressive and liberal compared to ex-Pope Benedict, aka “God’s Rottweiler.”

The Pope’s decision to resign was a surprise even to his brother, a priest in Regensburg, and Vatican spokesmen Father Lombardi Federico, who both confirmed that Pope Benedict had reached this decision on his own.  The Vatican has announced that a new Pope will be elected as soon by Easter, March, 31.  Pope Benedict will first retire to the Vatican summer residence at Castelgandolfo, before joining a monastery in Vatican City.