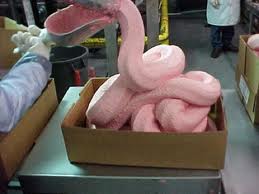 Ground-beef processor AFA Foods has filed for bankruptcy protection citing the impact of media coverage of one of its products dubbed “pink slime” by critics.

AFA Foods said it was forced to file for Chapter 11 bankruptcy protection “given recent changes in the market for its ground beef products and the impact of media coverage related to Boneless Lean Beef Trimmings (BLBT).”

BLBT (pink slime) is made from beef trimmings otherwise used in pet food and cooking oil that is treated with ammonia to deter e. coli bacteria. The lean, finely textured beef is typically added to ground meat, like hamburger, as a low-cost filler.

Based in King of Prussia, Pennsylvania, AFA also has plants in California, Georgia, New York, Pennsylvania and Texas. The company claims to be the nation’s largest ground beef processor, producing more than 700 million pounds (317 million kilograms) annually, mostly for food service companies. AFA Foods has seven production facilities and a workforce of more than 1,000 employees.