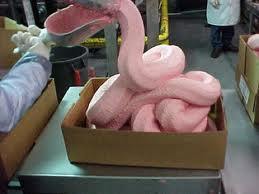 Consumer complaints of the ground-beef filler dubbed as “pink slime” has led to a slouch in short-term beef demand. Tyson Chief Operating Officer Jim Lochner recently said at an investor presentation that due to the recent upheaval about pink slime “put a fair amount of pressure on ground beef consumption.” He is confident the controversy will only be a “two week event.”

Beef Products Inc. took the brunt of the pink slime attacks early this month. A petition was put forth to remove the product from school lunches and drew hundreds of thousands of signatures this month. Former employees hopped on the social media train and released information about pink slime asserting that the product was responsible for E. coli and other dangerous substances in ground beef.

“We have complete confidence in our raw materials and our testing,” Rich Jochum, a BPI spokesman. Be that as it may, the name pink slime is out and it has tarnished the beef industry. Several retailers, including Kroger and Wal-Mart have said they would offer beef without de-fatted trimmings and McDonald’s halted its production a while ago.

The recent pink slime scare has caused Beef Products Inc to suspend production of plants in Amarillo, Texas; Garden City, Kansas: and Waterloo, Iowa.  Cargill Inc. has estimated about 850 million pounds of the additive are used in ground beef every year and that processors will now have to replace the filler with other cuts of meat, equally approx. 1.5 million cattle per year.