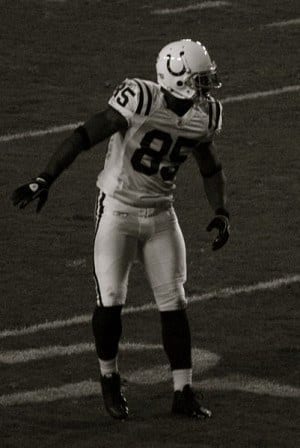 Pierre Garcon, who has been with the Indianapolis Colts all four of his NFL seasons, has just signed a contract with the Washington Redskins.  The $42.5 million deal was made just hours after the NFL free agency period started.  The deal includes a guaranteed $20.5 million and an $11 million signing bonus.

Pierre Garcon, a wide receiver, has had his talents questioned for his 2010 season.  According to CSN, Pierre Garcon had the third-worst ratio among wide recievers with 13 drops on 119 targets. Garcon’s most famous drop happened during the 2010 Superbowl against the Saints that experts say was a turning point for the Colt’s loss.
In his four seasons with the Colts, Pierre Garcon had 188 catches for 16 touchdowns and a 13.4 yard average.

However, Pierre Garcon has definitely honed his skills, and his 2011 season was significantly better.  With five drops, Pierre Garcon finished the season with the 15th-best ratio among wide recievers.  Ben Standig said, “It should also be noted he posted career-high numbers (70/947) despite the non-Mannings throwing him passes.”

Pierre Garcon will also be playing the 2012 season with Josh Morgan, who signed $12 million over the first two years of a five-year deal, and defensive end Adam Carriker, who re-signed with the Redskins for four years and $20 million, with $7 million guaranteed.