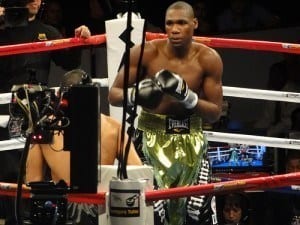 Paul Williams, two-time welterweight boxing champion, is in serious but stable condition after being thrown from his motorcycle in Marietta, G.A. on Sunday while driving to his brother’s wedding.

Paul Williams, known as “The Punisher,” severed his spinal cord in the accident and cannot move from the waist down, according to George Peterson, Paul Williams’ manager.

Paul Williams, 30, was riding to the home of one of his brothers in order to prepare for the wedding of another brother at about 8:00 a.m. Sunday when he swerved to avoid a car merging into his lane. Paul Williams was thrown off his motorcycle when he then swerved to avoid an oncoming car. According to the New York Daily News, Williams was travelling about 75 miles per hour at the time of the crash. He reportedly landed on his neck and back. One of the drivers of the cars dialed emergency responders.

Paul Williams is scheduled to undergo surgery Wednesday to stabilize the section of his spine that controls movement of the hands, arms, torso and head.

Williams’ manager stated, “I know he’s going to make a statement after surgery on Wednesday, because he’s that kind of person. He’s 100 percent coherent and still has the will to want to get back on the motorcycle.” Peterson added that Williams was in good spirits and telling jokes.

Paul Williams was scheduled to fight Saul “Canelo” Alvarez in September. That fight has been canceled, according to Williams’ manager.

Dan Goosen, Paul Williams’ promoter, stated, ”Right now, there’s no thinking about any fights right now except for the fight that’s facing Paul right now – to get movement back in his body and keep the movement that’s above his waist.”