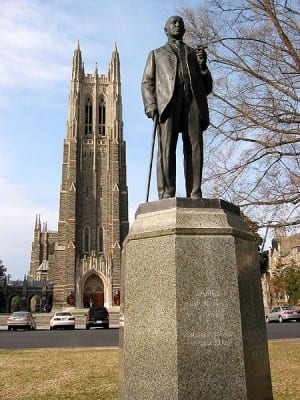 Duke University officials and police are searching for those involved in the placing of a rope noose outside the student commons area, in the Bryan Center. Officials say that the noose was discovered at 2 a.m., Wednesday morning, and that they will work to find the culprit or culprits. President Richard Brodhead spoke to a crowd of several thousand, as they gathered in front of the University chapel. He told them that even though the administration and police are looking for those responsible, it is up to each individual to reject racism. “One person put up that noose, but this is the multitude of people who got together to say that’s not the Duke we want,” he said while speaking to the crowd.

In a region where terror and violence against African Americans was once prevalent, Duke University has been plagued by several recent events to include, a report of hate-speech directed at students on the East Campus, and now, the discovery of the noose. Provost Sally Kornbluth sent out an email to students, saying that the campus has been “jolted,” by these recent events.

The incident reared its ugly head just days after students helped organize a recruiting day at Duke for talented black high school students from around the United States. One of the organizers Tara-Marie Desruisseaux, 19, from New York City stated that in light of the recruiting effort, she feels that “they’re looking back at us and wondering, what were they selling me and what do they accept that they think Duke is so great?”

Another student, who identifies herself as half-Japanese and half-Columbian, said that she is  “appalled and embarrassed to go to the school right now,” after she saw a photo of the noose on Facebook just after waking up Wednesday. “Coming to Duke, I was very nervous about the racial tensions at the school but I never actually imagined that something so blatantly racist could happen here.”