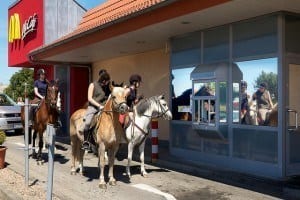 A horse goes into McDonald’s…

Sounds like the end of a joke, right? Well here’s the punch line. A woman actually brought her horse in McDonald’s after she was refused service at the drive-thru.

A British woman and her daughter tried to ride their horse and pony through a Whitefield McDonald’s over the weekend. Staff members refused to serve them. Then, as any reasonable person would do, the woman took the horse in the McDonald’s.

The horse (because it’s a horse) defecated on the floor. McDonald’s food is hard enough to eat without having to deal with the smell of horse manure in the restaurant.

Whitefield police were called to deal with the horse in the McDonald’s. They released a statement on Facebook.

“The sight and smell of this caused obvious distress and upset to customers trying to eat, as well as staff members. Officers arrived at the location and woman was issued a Fixed Penalty notice for causing alarm & distress to other customers and staff,” the statement read.

McDonald’s issued a statement confirming the incident, and rationalizing their policy for the drive-thru.

“The health and safety of our customers and staff is our top priority and for this reason we are unable to serve pedestrians, bicycle riders or customers on horseback through the drive-thru.”

In good news, the woman’s daughter clearly doesn’t take after her. The girl stayed outside with her pony as her mother did one of the most embarrassing things a child could ever have to endure.