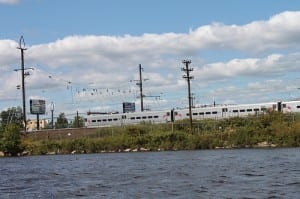 Both New Jersey and New York commuters are delayed

NJ Transit services are trying their best to get back up and running for commuters, but even with the revival of a couple of trains there, Sandy’s effects are still hitting citizens. Monday, Nov. 5 was the first day morning commute since New Jersey and New York rail and subways systems were damaged by the storm, and those used to waking up and taking the train to work are feeling crowded and incredibly delayed.

NJ Transit may have reopened the New Jersey Coast Line route Monday morning, but it was forced to a close after crowding threatened the safety of its customers, according to the Wall Street Journal. The service was already limited for the line that goes between Woodbridge, N.J. and New York Penn Station, and the overcrowding that began at 6 a.m. brought the service just an hour later.

Over in New York City, commuters that use MTA buses, L and G trains were feeling the loss of their subway system as they had to expect commutes that may be double to time than usual. With certain routes not functional, commuters had to reroute their commutes to simply arrive in the vicinity of their offices. Like NJ Transit users, New York commuters have to make changes that increasingly frusterating.

Hurricane Sandy may have cleared up for this region of the U.S., but the effects are still felt as those who live in New York and New Jersey must find a way to get through their days without proper NY and NJ Transit. Officials are working hard to get transit back to their previous condition.