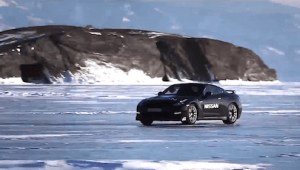 The Russian ice speed record has been set by a standard production model Nissan GT-R at 184mph, according to Skiddmark.com.

The Nissan, driven by race driver Roman Rusinov, hit top speeds across sheet ice on the Baikal Lake in Russia. The record-breaking run saw the fastest drive across ice in Russian history, in a car with 542-brake horsepower.

One of Nissan’s top-end performance models, the GT-R is an award-winning sports car. Its power is just the start, with a V6 3.8L engine key to its strength. Improved handling means the driver feels more comfortably in control – even in extreme conditions.

Temperatures for the record attempt were as low as -70 degrees, with arctic winds whipping across the lake. The lead driver for the attempt was Rusinov, who said it was like “battling nature” to fight against the ice-cold breeze at those speeds.

Testament to the grip and handling performance of the GT-R, it was able to cling on to set the new record. The run took place across the frozen Baikal Lake – the biggest freshwater lake in the world.

At the time of the attempt, the ice coverage over the lake was thought to have been over 5-foot thick. Chilling winds created difficult conditions for the drivers, expected to maintain speed over a stretch of 7km.

Rusinov said that the experience was challenging. “The slightest gust of wind makes the car lose the track and for the full 7 kilometers you are fighting against the power of nature.”

Rusinov was accompanied on his record attempt by automotive journalist Andrei Leontjev. For Leontjev, the journey is less about setting the record as it is about connecting with Russian history. In his eyes, the Baikal represents a symbol of Russian strength, while claiming the record is his symbol of conquering it.

The pair teamed up with Nissan engineers and LAV Productions to attempt the record for all-wheel drive vehicles. But with the new record rapidly gaining publicity, it can’t be too long before the next challengers prepare for an attempt.

The speed and control of the record attempt is no doubt impressive. But while their own record might have toppled, the Russians still have some catching up to do. Bentley hold the world ice speed record for production issue cars with over 205mph – over 20mph faster than the Baikal drive.

Some analysts have snubbed ice speed tests as a PR gimmick. For others, testing cars to the fullest has an important benefit for ordinary motorists.

Lynch Chevrolet is a Chevy dealership Milwaukee residents trust. But can drivers trust how their car might perform under extreme circumstances?

“Ice speed tests may be flashy, but for motorists they highlight the need for a responsive vehicle. Performance cars blaze a trail for technologies across the rest of the industry. It is record attempts like these that show us what’s possible.”

The Nissan GT-R was first launched in 2007 in Japan. Today it is one of the most desirable performance cars on the market, having won countless industry awards.
Roman Rusinov, the GT-R’s driver, has raced in the Le Mans 24 Hours endurance race several times and is one of the country’s most celebrated motorsport icons.